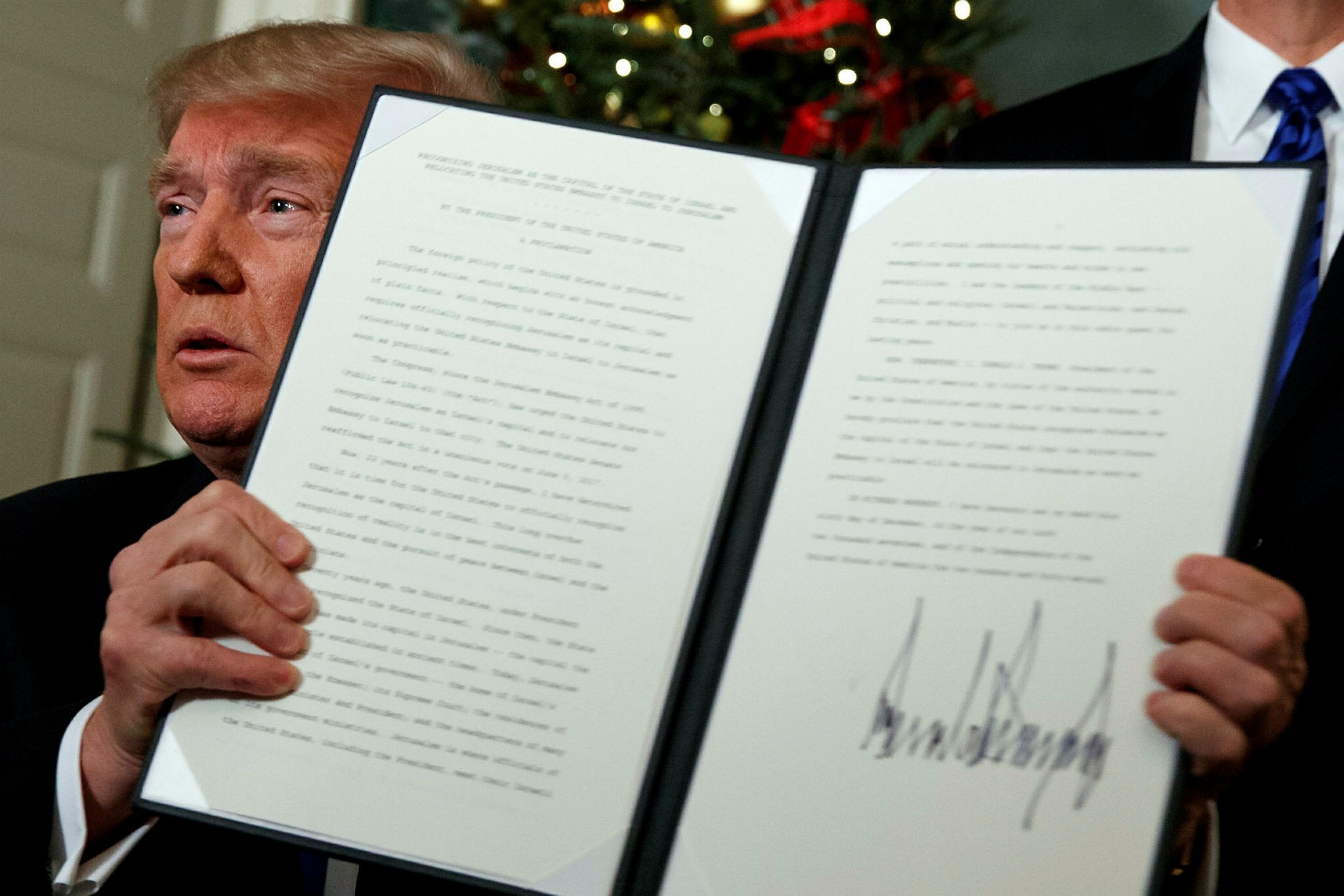 President Donald Trump holds up a proclamation to officially recognize Jerusalem as the capital of Israel, in the Diplomatic Reception Room of the White House, Wednesday, Dec. 6, 2017, in Washington. (AP Photo)
by Daily Sabah Dec 08, 2017 12:00 am

As Donald Trump's controversial decision to move the American embassy from Tel Aviv to Jerusalem and recognize the city as Israel's capital continues to make headlines all over the world, the real estate mogul-turned-president has faced a new wave of opposition at home and from fellow Western leaders.

Jewish organizations in the United States slammed Trump's controversial move on Thursday, saying that the decision puts the two-state-solution at risk.

"President Trump's ill-timed, but expected, announcement affirms what the Reform Jewish Movement has long held: that Jerusalem is the eternal capital of the Jewish people and the State of Israel. While we share the President's belief that the U.S. Embassy should, at the right time, be moved from Tel Aviv to Jerusalem, we cannot support his decision to begin preparing that move now, absent a comprehensive plan for a peace process," Union of Reform Judaism said in a statement.

"Additionally, any relocation of the American Embassy to West Jerusalem should be done in the broader context reflecting Jerusalem's status as a city holy to Jews, Christians and Muslims alike...the White House should not undermine these efforts by making unilateral decisions that are all but certain to exacerbate the conflict. We urge the President to do everything in his power to move forward with efforts to bring true peace to the region and take no unilateral steps that will make that dream more distant."

Another Jewish organization in the U.S., J Street also released a statement criticizing Trump's decision. While acknowledging that Israel's capital is Jerusalem "without question," the "Home of Pro-Israel, Pro-Peace Americans" said a Palestinian capital must also be established in East Jerusalem.

"The effect of moving the American embassy from Tel Aviv to Jerusalem or of declaring that Jerusalem is Israel's capital prior to a negotiated agreement will be to anger key Arab allies, foment regional instability and undermine nascent U.S. diplomatic efforts to resolve the larger conflict. The administration has set an important goal – one which J Street shares – to reach a comprehensive resolution to the long-standing conflict between the Jewish and Palestinian peoples that hurts American interests and threatens Israel's long-run security," Jeremy Ben-Ami, the President of J Street said in the statement.

Urging the administration to act with commonsense and heed warnings by U.S. and Israeli security experts, the president of the organization warned that "any move that prejudges the outcome of negotiations around Jerusalem could deal a devastating blow to jumpstart the diplomatic process."

"President Trump many not understand what's at stake here, but we do. Moving the embassy risks igniting the tinderbox of anger, frustration and hopelessness that already exists in Jerusalem. Throwing...balance off with this unilateral gesture could have grave consequences," it said.

U.S. lawmakers were also critical in the aftermath of the controversial decision.

"When President Jimmy Carter sat down at the negotiating table with Egyptian President Anwar Sadat and Israeli Prime Minister Menachem Begin at Camp David in 1978, he reiterated that Jerusalem's final status would not be decided unilaterally. Every successive U.S. administration since then has upheld that approach," Representative Gerry Connolly reminded Trump.

"With President Trump's announcement today, he has abandoned that commitment and it is incumbent on his Administration to explain to the world how this decision brings us closer to a two-state solution to the Israeli-Palestinian conflict."

Calling Trump's declaration of the new Israeli capital "an unhelpful step with no tangible benefits" and "only serious risks," Representative Lloyd Doggett warned that the move "could seriously undermine the administration's stated commitment to resolving the Israeli-Palestinian conflict," and said it also went against long-standing bipartisan presidential policy and threatened Israel's security while "alienating Arab regional partners."

"President Trump thrives on chaos, but chaos in foreign policy is often the enemy of peace and security. Like the chaotic positions taken regarding North Korea and Iran, this decision increases the danger to Americans and potentially risks lives in a volatile region," he said, adding that the move is a major setback in years of efforts to achieve peace "in one of the world's most troubled regions."

"The president has undermined America's role as the most effective broker for a two-state solution to the conflict, and his decision will have long-lasting implications," he warned.

Senators of Jewish origin, Dianne Feinstein and Bernie Sanders also slammed the controversial move, implying the fact that the recognition is bound to fuel anti-Semitism, and threaten stability in the region.

"Recognizing Jerusalem as Israel's capital - or relocating our embassy to Jerusalem - will spark violence and embolden extremists on both sides of the debate...If you break with this long tradition of bipartisan foreign policy [of not recognizing to remain impartial], you'll erode American credibility as an unbiased mediator, alienate us from our international partners - such as Jordan - and undermine any remaining hope for a two-state solution," Feinstein said.

The former presidential hopeful also warned Trump, saying that "there is a reason why all past U.S. administrations have not made this move and why leaders around the world have warned Trump against it."

Sanders said that the recognition would undermine the prospects for an Israeli-Palestinian peace agreement and "severely, perhaps irreparably, damage our ability to broker it."

European leaders also did not keep silent on the move. "I cannot remain silent about my deep concern for the situation that has developed in recent days. And at the same time, I wish to make a heartfelt appeal to ensure that everyone is committed to respecting the status quo of the city, in accordance with the relevant resolutions of the United Nations. Jerusalem is a unique city, sacred to Jews, Christians and Muslims, where the Holy Places for the respective religions are venerated, and it has a special vocation to peace," Pope Francis said.

"During our bilateral meeting we discussed mainly four issues; first of all, the Middle East peace process, the European Union support, the resumption of a meaningful peace process towards a two-state solution. We believe that any action that would undermine these efforts must absolutely be avoided. A way must be found through negotiations to resolve the status of Jerusalem as the future capital of both states so that the aspiration of both parties can be fulfilled," she said.

Theresa May, the Prime Minister of the United Kingdom, also cautioned Trump, saying that Jerusalem should "ultimately be the shared capital of the Israeli and Palestinian states."

"France and Europe are committed to a two-state solution," he said.

German officials also slammed the recognition, with Foreign Minister Sigmar Gabriel saying "The U.S.' recognition of Jerusalem as the capital of Israel will be counterproductive and only worsen the crisis. A solution to the issue of Jerusalem should be achieved through negotiations."

"Jerusalem's future will be defined within the framework of the peace process based on the two states, Israel and Palestine," he said.

Turkey also strongly reacted against the decision and slammed the U.S., while President Recep Tayyip Erdoğan warned the country could cut diplomatic relations with Israel.