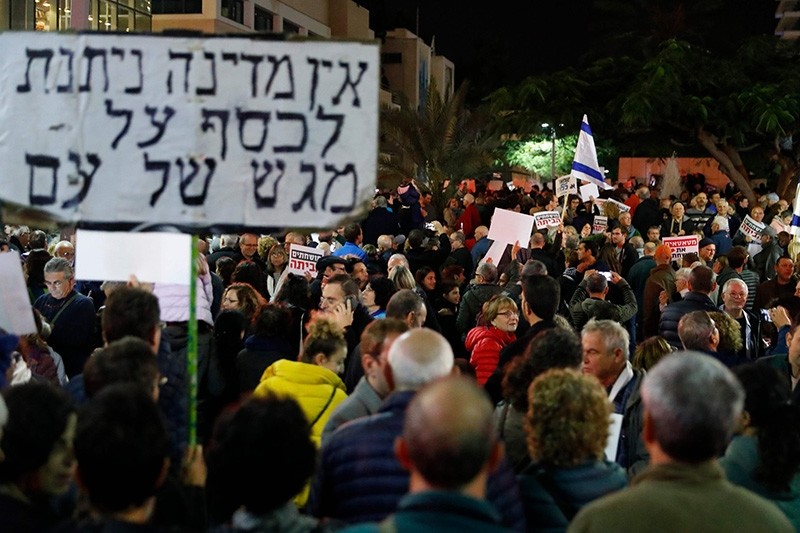 Israelis take part in a demonstration under the name ,March of Shame, to protest against government corruption and Prime Minister Benjamin Netanyahu on December 9, 2017 in Tel Aviv. (AFP Photo)
by Dec 09, 2017 12:00 am

Thousands of people rallied in central Tel Aviv on Saturday night in what organizers called a "March of Shame" in protest at alleged corruption in government.

His close political ally MP David Bitan, parliamentary chairman of the ruling coalition, has also been grilled at length over separate allegations of bribery and links with organized crime during his time as deputy mayor of Rishon Lezion, near Tel Aviv.

Police closed the upscale Rothschild Boulevard and a number of surrounding main thoroughfares for the march but did not give an estimate of attendance.

The protest is billed as being non-partisan and some marchers wore T-shirts with the slogan "Not right, not left, straight" in Hebrew.

Haaretz newspaper put the turnout at about 10,000, sharply down from the tens of thousands who had marched a week earlier.

Media commentators had predicted that fewer might take part, as Netanyahu's popularity was boosted by US President Donald Trump on Wednesday recognizing Jerusalem as Israel's capital.

Netanyahu's warm relationship with Trump was widely credited with influencing what he called the president's "historic" and "courageous and just decision".

The controversial recognition, however, sparked a worldwide diplomatic backlash.

Netanyahu is suspected of having received luxury gifts from affluent individuals including Israeli businessman and Hollywood producer Arnon Milchan, who has also been questioned.

Milchan, a long-time friend of Netanyahu, reportedly sent him boxes of expensive cigars and other items worth tens of thousands of dollars.

Netanyahu has also been questioned over a secret deal he allegedly sought for favorable coverage with the publisher of top-selling Israeli daily Yediot Aharonot.

Investigators suspect that the alleged pact -- believed not to have been finalized -- would have seen him receive favorable newspaper coverage in return for helping curb Yediot's competitor, the pro-Netanyahu freesheet Israel Hayom.