Macron urges Netanyahu to work for peace, get out of ‘dead-end’ 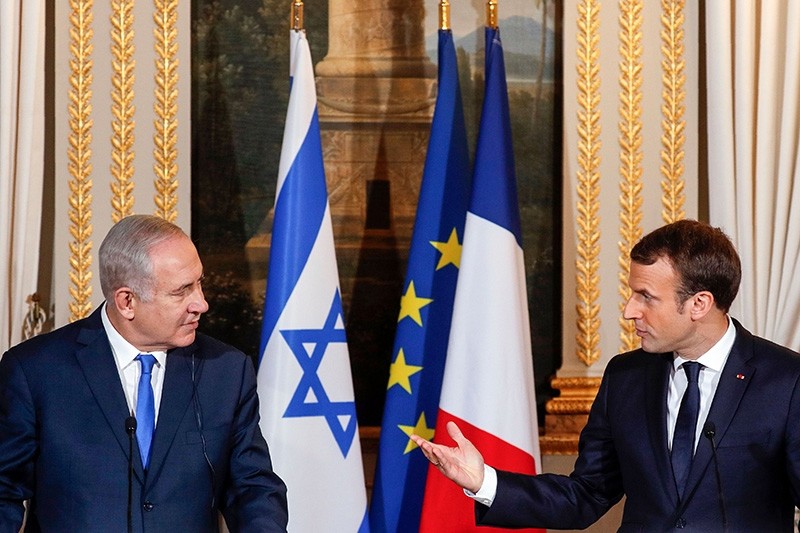 Macron told Netanyahu he disapproved of the U.S. recognition of Jerusalem as Israel's capital, a controversial move announced by U.S. President Donald Trump on Wednesday that led widespread protests across the Muslim world.

Along with emphasizing the absolute necessity of a two-state solution, Macron urged Netanyahu to build goodwill with Palestinians that would help rekindle the peace process.

"I urged the prime minister to show courage in his dealings with the Palestinians to get us out of the current dead-end," Macron said after talks with the Israeli leader.

"It seems to me that freezing settlement building and confidence measures with regard to the Palestinian Authority are important acts to start with, which we discussed with Prime Minister Netanyahu," he said.

Netanyahu, in turn, said in the meeting that he would not take "lectures about morality" from President Recep Tayyip Erdoğan after the Turkish president accused him of running a terror state, targeting children and undermining peace.

Erdoğan strong condemned the move to make Jerusalem Israel's capital, saying "Trump's declaration of Jerusalem as the capital of Israel is null and void for us."

"Palestine is the victim, the oppressed. Israel is a perfect example for an invader state," Erdoğan said Sunday.

The president also said over the weekend that Turkey would draw up a roadmap for Muslim countries to follow as they opposed the U.S.-decision. He added that Turkey would oppose the plan within international law and through democratic principles.

Israel considers the city as its undivided capital, but Palestinians believe the east is illegally occupied and see it as the capital of their future state.