US contradicts itself with decision to move embassy to Jerusalem 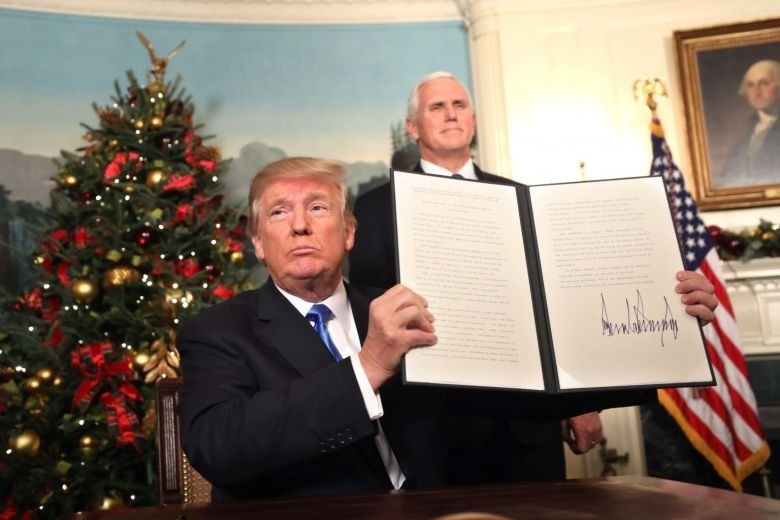 Despite positive steps made by Palestinian factions in the last months and the U.S.'s desire to re-launch peace talks, Trump's recent decision fades hopes for peace

U.S. President Donald Trump, prior to his election, promised that he would move the U.S. embassy from Tel Aviv to Jerusalem, which, de facto, means that the U.S. was going to recognize the city, considered holy by the three Abrahamic religions, as Israel's capital. Since 1967, namely the six-day war, Israel has been holding the city under occupation and declared in 1980 that it was its capital. Although no country recognizes Israel's claim that its presence is legitimate and in accordance with U.N. resolutions call upon countries to move their diplomatic delegations out of the city, Israel has been expanding its control over the city in recent years by making new settlements and forcing the Palestinians to abandon their lands.

Trump, who has accused former U.S. governments with failing to find a solution in the Palestinian-Israeli crisis, promised that he was keen to re-launch the peace process with a focus on the two-state solution. Thus, he pressured Israel last month to postpone a prospective bill to annex several parts of Arab-populated Jerusalem. In the planned schedule, the bill was to be voted on in the last week of October by a ministerial committee and sent to parliament for finalization. However, Israeli officials expressed their concerns about international pressure, as the U.S. was reluctant to back Israel's move. Israelis retreated, fearing that the bill would cause international outrage since new settlements were going to replace Arabs' homes.

Trump also recently barred U.S. officials from renewing the Palestinian Liberation Organization's (PLO) license to maintain activities in Washington under the pretext that the Palestinian Authority (PA) under the Mahmoud Abbas administration was not doing enough for peace. This move was considered as Trump's decisiveness to pressure any side that aims to forestall prospective peace negotiations.

Besides, Israeli and U.S. officials welcomed the decision by Hamas and al-Fatah to create a reconciliation government and also Hamas' hand over of Gaza's rule to the PA. Both the U.S. and Israel consider Hamas a terror organization and its rule in Gaza was used as pretext by the two countries to legitimize aggression on the densely populated tiny territory. Yet seeking to decrease international pressure, Hamas and Al-Fatah agreed to reconcile with elections to be held next year. Two days of meetings in Cairo last month ended with a joint statement demanding PA President Mahmoud Abbas set a date for elections. The factions also agreed that the process in Gaza should be accelerated so that the PA could take full control.

However, Trump suddenly changed his way and said he would move the embassy to Jerusalem and put the 1995-dated Congress decision that recognizes Jerusalem as Israeli capital in force. This decision clearly is in contradiction with his previous pledges on peace and obviously will deteriorate affairs since hundreds of Palestinians are on the streets and Hamas has made a call for intifada. By doing so, Trump has also enabled Hamas and Islamic Jihad to claim that their insistence not to reconcile with Israel and the U.S. is realistic, as the two countries take bigger steps to erase Arab presence in the country, particularly in Jerusalem on every occasion.