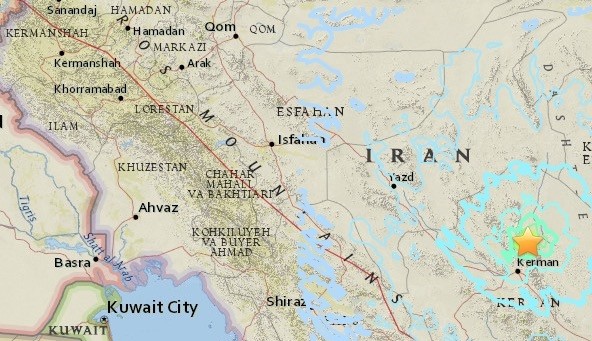 Eighteen people were wounded in the quake, which struck in the villages of Hejdak and Ravar in Kerman province, the national emergency service told state broadcaster IRIB.

Officials said old houses were damaged in six villages, and classes at schools and universities were cancelled.

The quake struck at 12:13 pm (0843 GMT) with the epicenter around 50 kilometers (30 miles) north of the provincial capital of Kerman and about 800 kilometers from Tehran.

It was measured as magnitude 5.9 by the US Geological Survey and several smaller aftershocks were reported.

Later Tuesday, the USGS reported another quake in the region, a 6.0-magnitude temblor about 65 kilometers from Kerman.

"Overall, the population in this region resides in structures that are extremely vulnerable to earthquake shaking, though some resistant structures exist," the service said.

Iran sits atop several fault lines, and Tuesday's quake comes less than a day after a 6.0-magnitude tremor struck the western province of Kermanshah along the border with Iraq.

On November 12, Kermanshah was hit by a major 7.3-magnitude quake that killed 620 people according to the latest toll provided Monday by Tasnim news agency.

Iran's worst quake in recent years was a 6.6-magnitude tremor that struck near Bam in 2003, decimating the ancient city and killing at least 31,000 people.

Iran has experienced at least two other major disasters in recent years -- one in 2005 that killed more than 600 people and another in 2012 that left some 300 dead.