Jerusalem rocked by protests for second Friday in a row 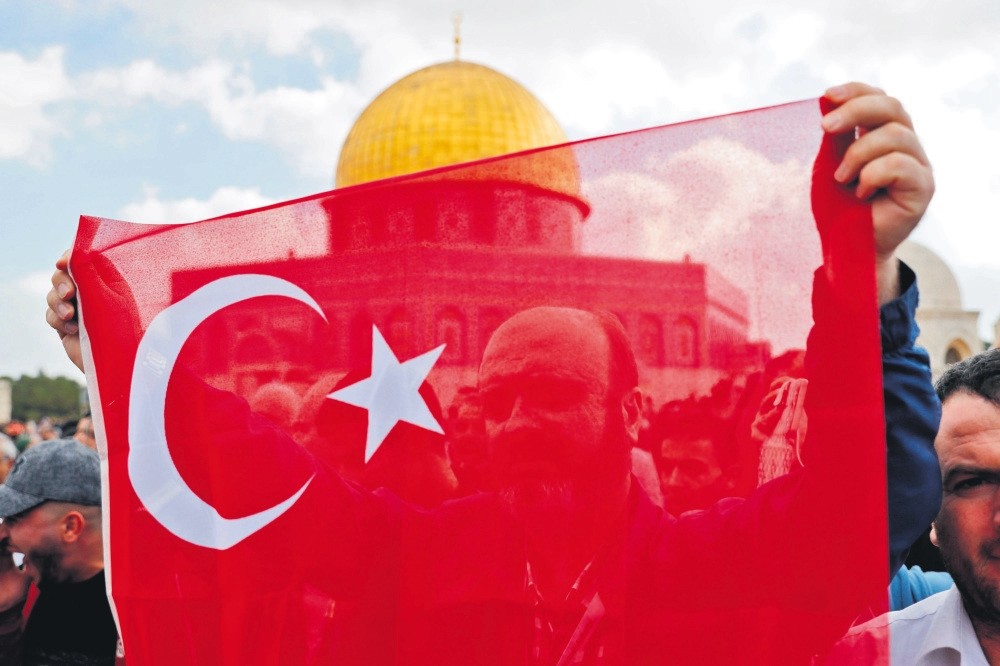 A MuslIm worshipper waves the Turkish flag in front of the Dome of the Rock at the Al-Aqsa Mosque compound in Jerusalem's Old City.
by Daily Sabah with Agencies Dec 16, 2017 12:00 am

A Palestinian man was shot and injured after allegedly stabbing an Israeli soldier during clashes that erupted Friday in the West Bank city of Ramallah, according to eyewitnesses.

"Three Israeli soldiers fired 20 bullets at the young man at close range," one witness told Anadolu Agency (AA). "He has since been taken to a hospital in Ramallah for treatment where he remains in critical condition," a witness, speaking anonymously due to security concerns, said. According to the Palestinian Red Crescent Society (PRCS), dozens of Palestinians were injured Friday in clashes with the Israeli security forces that broke out across the occupied West Bank.

In a statement, the PRCS said as many as 60 people had suffered injuries during clashes that occurred in the West Bank cities of Jerusalem, Ramallah, Hebron, Bethlehem, Tulkarm and Jenin.

"Ten were injured by live ammunition, including two who are now in critical condition," the statement read. "Twenty others sustained injuries from rubber bullets while 30 more suffered from excessive tear gas inhalation," it added. Israeli forces, the PRCS noted, had also assaulted four journalists during clashes in Ramallah and Hebron.

Gaza Health Ministry spokesman Ashraf al-Kidra said 16 Palestinians were injured in clashes on Friday in two locations along Gaza's border with Israel. He said one was seriously wounded and in critical condition while another 15 are in moderate condition. The Israeli military had no immediate comment.

The Trump announcement departed from decades of U.S. policy that the status of Jerusalem should be decided through negotiations. Protests in response to the announcement have taken place in various Arab and Muslim countries in the region.Palestinians were infuriated by Trump's announcement on Dec. 6, because they saw it as siding with Israel on the most sensitive issue in the conflict. Palestinian Authority President Mahmoud Abbas said on Wednesday during the emergency summit held by the Organization of Islamic Cooperation in Istanbul that Trump's move has disqualified the U.S. from continuing in its role as the traditional mediator of peace talks.

At least four Palestinians have been killed and hundreds injured in clashes with Israeli forces, including and at least one alleged airstrike, since Trump announced his decision last week to recognize Jerusalem as Israel's capital.

The OIC responded during the summit in Istanbul by recognizing East Jerusalem as the capital of Palestine.