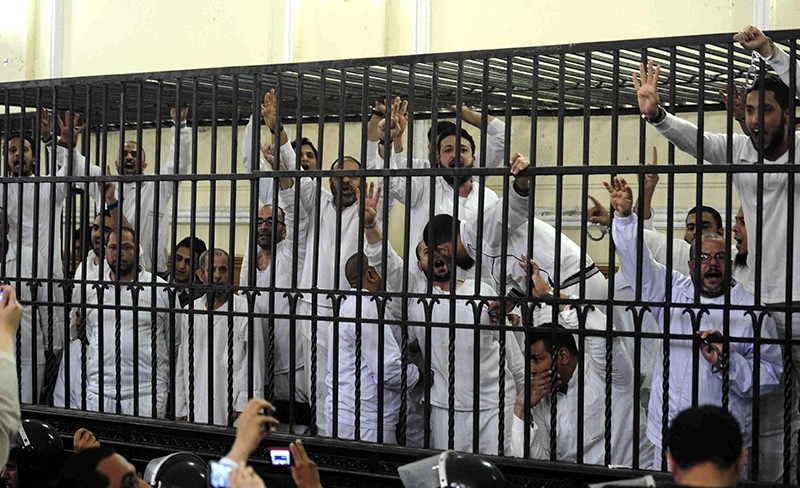 Supporters of the Muslim Brotherhood and ousted President Mohamed Morsi, standing trial on charges of violence, react after two fellow supporters were sentenced to death, in a court in Alexandria in this March 29, 2014, file photo. (Reuters Photo)
by Anadolu Agency Dec 17, 2017 12:00 am

The court also handed 24 convicts life sentences, five others 15-year-sentences and acquitted two members of the Muslim Brotherhood, said the sources who refused to be named due to restriction on speaking to the media.

Those handed life sentences, of which four are fugitives, were accused of being members of now-banned Muslim Brotherhood, bombing several locations in Alexandria and shooting at vehicles of the Justice Ministry.

According to the Egyptian law, the defendants have the right to appeal within 60 days.

Earlier in October, an Egyptian military court sentenced 13 to death for alleged violence in 2014.

In June, 30 others were sentenced to death for their alleged part in Prosecutor-General Hisham Barakat's car bombing.

Egypt has been roiled by chaos since mid-2013 when the army overthrew Mohamed Morsi, the country's first democratically elected president and a leader of the Muslim Brotherhood group.

Since Morsi's ouster, Egypt's post-coup authorities have waged a relentless crackdown on dissent, killing hundreds of Morsi's supporters and throwing tens of thousands behind bars.