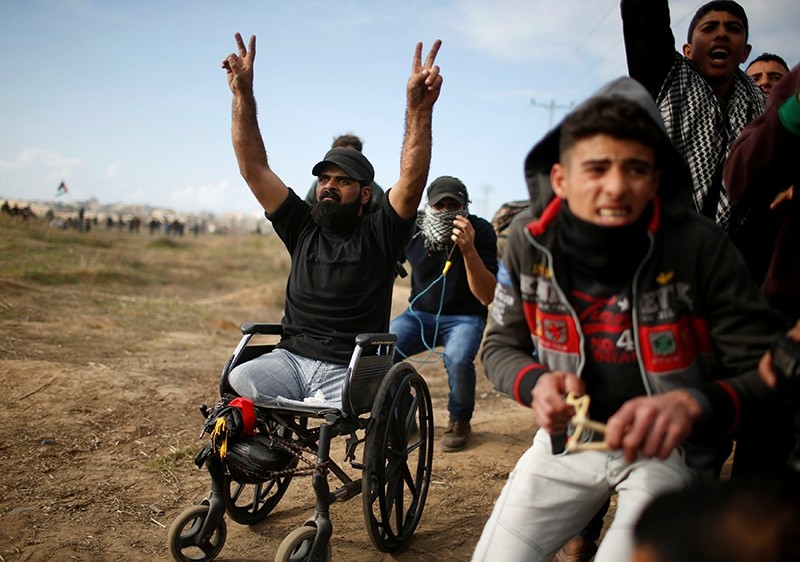 Wheelchair-bound Palestinian Ibraheem Abu Thuraya, who was killed by Israeli troops, gestures during a protest against U.S.' recognition of Jerusalem as Israel's capital, near the border with Israel in near Gaza City, Dec. 15, 2017. (Reuters Photo)
by Compiled from Wire Services Dec 19, 2017 12:00 am

The U.N. High Commissioner for Human Rights Zeid Ra'ad Al Hussein condemned on Tuesday the killing of a wheelchair-bound Palestinian man during clashes along the Israel-Gaza border on Friday.

Ibrahim Abu Thuraya, 29, lost his legs during an Israeli airstrike nine years ago. He was one of four Palestinians killed during a wave of protests and clashes over the weekend following U.S. President Donald Trump's decision to recognize Jerusalem as Israel's capital.

"The facts gathered so far by my staff in Gaza strongly suggest that the force used against Ibrahim Abu Thurayeh was excessive," Zeid said, adding that Thuraya appears to have been killed by a bullet wound to the head when he was around 20 meters from the Israel-Gaza border fence.

Zeid said that given Thuraya's disability there was no evidence that he posed a threat to the Israeli forces.

"His killing is incomprehensible — a truly shocking and wanton act," Zeid said.

Trump's Jerusalem declaration nearly two weeks ago sparked protests and violent clashes between Palestinians and Israeli security services. Scores of Palestinians have been injured and eight Palestinians — including two Hamas militants and a Palestinian attacker — have died during the unrest following the U.S. move.

Thuraya lost both of his legs during an Israeli incursion east of the Al-Bureij refugee camp in central Gaza in April 2008.

"He was injured in 2008 by an Israeli helicopter that targeted him after he brought down the Israeli flag and raised the Palestinian flag along the border," his brother Samir told French Press Agency (AFP) after his death was confirmed on Friday.

"It did not stop him from demonstrating for Jerusalem. He went alone every day to the border."

He was seen at multiple demonstrations in recent years.