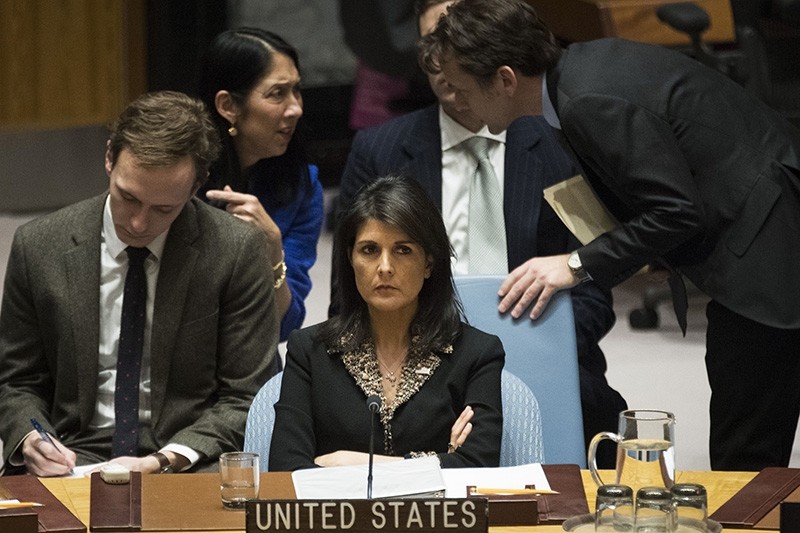 U.S. ambassador to the United Nations Nikki Haley listens during a Security Council meeting concerning the situation in the Middle East involving Israel and Palestine, at United Nations headquarters (AFP Photo)
by Dec 20, 2017 12:00 am

U.S. Ambassador Nikki Haley on Tuesday warned countries that she will report back to President Donald Trump with the names of those who support a draft resolution rejecting the U.S. decision to recognize Jerusalem as Israel's capital.

The U.N. General Assembly will hold an emergency session Thursday to vote on the proposed measure that the United States vetoed at the Security Council.

"The president will be watching this vote carefully and has requested I report back on those countries who voted against us," said the letter from Haley seen by AFP.

"We will take note of each and every vote on this issue," she wrote to several U.N. ambassadors.

Haley posted on Twitter that "the U.S. will be taking names" during the vote on Thursday at the 193-nation assembly.

Turkey and Yemen requested the urgent meeting on behalf of the Arab group of countries and the Organization of the Islamic Cooperation (OIC).

The two countries circulated a draft resolution on Tuesday that mirrors the vetoed measure, reaffirming that any decision on the status of Jerusalem has no legal effect and must be rescinded.

Egypt had put forward the draft at the council which was backed by all 14 other Security Council members in the vote on Monday.

Like the Egyptian draft, the text before the assembly does not mention Trump's decision but expresses "deep regret at recent decisions concerning the status of Jerusalem."

Palestinian ambassador Riyad Mansour said he expected "overwhelming support" for the measure stating that Jerusalem is an issue "to be resolved through negotiations" between Israel and the Palestinians.

"The General Assembly will say, without the fear of the veto, that the international community is refusing to accept the unilateral position of the United States," Mansour told reporters.

No country has veto powers in the General Assembly, contrary to the council where the United States, along with Britain, China, France and Russia, can block any resolution.

Key U.S. allies Britain, France, Italy, Japan and Ukraine were among the 14 countries in the 15-member council that voted in favor of the measure.

After that vote, Haley described the 14-1 vote "an insult" and warned "it won't be forgotten."

She went further on Tuesday, warning in her Twitter post: "At the U.N. we're always asked to do more & give more. So, when we make a decision, at the will of the American ppl, abt where to locate OUR embassy, we don't expect those we've helped to target us.

"On Thurs there'll be a vote criticizing our choice. The U.S. will be taking names."

After the clash at the top U.N. body, the White House announced that U.S. Vice President Mike Pence was delaying a trip to the Middle East planned for this week.

Israel seized control of the eastern part of the city in the 1967 Middle East war and sees all of Jerusalem as its undivided capital. The Palestinians view the east as the capital of their future state.

Several U.N. resolutions call on Israel to withdraw from territory seized during the 1967 war.