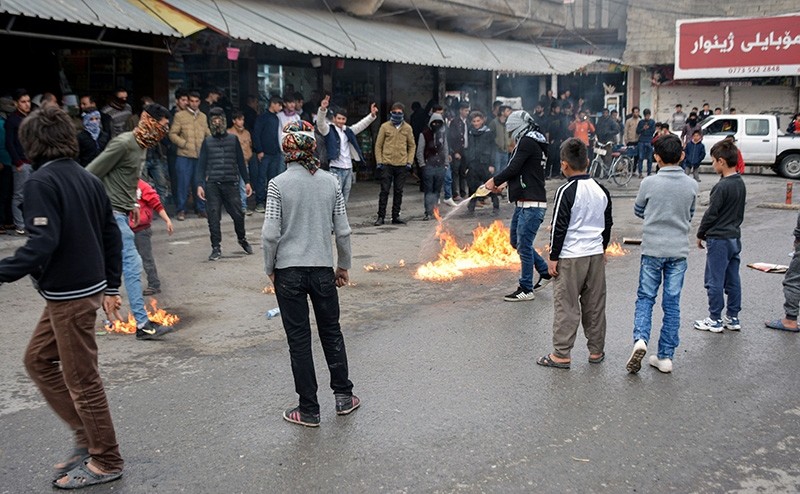 A picture taken on December 20, 2017 shows a protester pouring oil on a fire in a street during a demonstration against political corruption in the city of Rania, in northern Iraq. (AFP Photo)
by Dec 21, 2017 12:00 am

Hundreds of protesters faced off with security forces in northern Iraq's Kurdish Regional Government (KRG) region for a fourth day Thursday, demanding the resignation of politicians accused of graft.

Police deployed en masse in the town of Rania, where five demonstrators were shot dead and dozens wounded Tuesday amid public anger over an economic crisis partly triggered by an independence vote.

Since Monday, around 20 party offices and a town hall have been set ablaze across the region as protesters ramped up calls for the government to quit.

Police reinforcements, some with riot gear, deployed Wednesday night including in the center of KRG's second city Sulaymaniyah, an AFP correspondent said.

The protests follow a September independence referendum that triggered an unprecedented crisis between the regional government and Baghdad, which slammed the poll as unconstitutional.

A conflict with Baghdad over federal budget payments has exacerbated the most serious economic crisis in the regional government's history.

Kurdish civil servants have been on reduced salaries for months, while the price of fuel has soared due to demand for winter heating.

Faced with popular fury, the Goran party and Kurdistan Islamic Group announced they were withdrawing their ministers from the regional government.