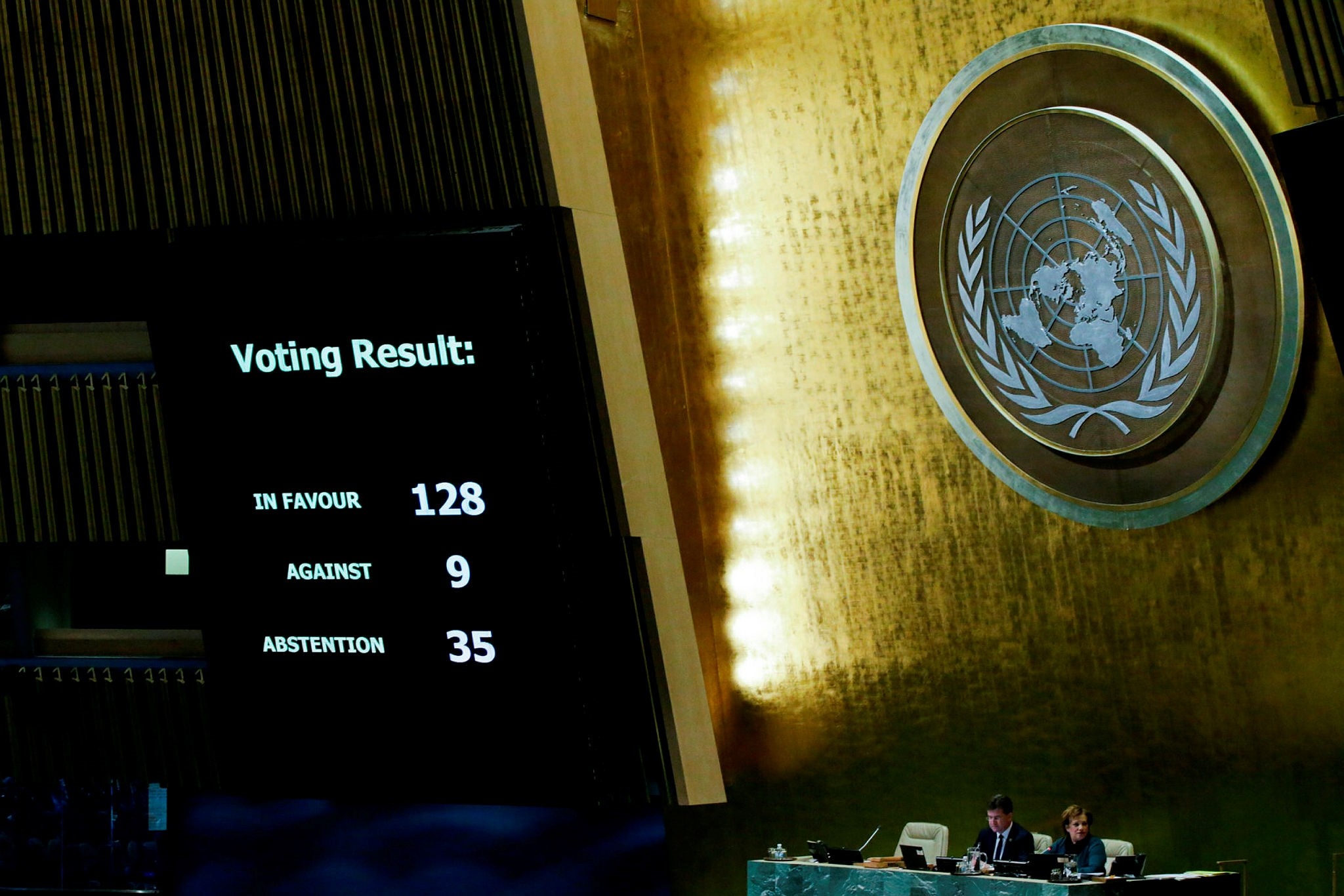 The results of the vote on Jerusalem are seen on a display board at the General Assembly hall, on December 21, 2017, at UN Headquarters in New York. (AFP Photo)
by Daily Sabah with Agencies Dec 21, 2017 12:00 am

More than 100 countries defied President Donald Trump on Thursday and voted in favor of a United Nations General Assembly resolution calling for the United States to withdraw its decision to recognize Jerusalem as Israel's capital.

Thursday's vote, while a victory for the Palestinians, was significantly lower than its supporters had hoped for, with many forecasting at least 150 "yes" votes. It is noteworthy that 21 countries were absent.

In that sense, it was a victory for the United States, with Trump's threat to cut off U.S. funding to countries that oppose his decision having an impact.

Trump had threatened to cut off financial aid to countries that voted in favor. His warning did appear to have some impact with nine countries voting against the resolution and 35 abstaining.

Speaking during the session before the voting, Palestinian Foreign Minister Riad al-Maliki slammed Trump's declaration, saying "Does the U.S. not wonder why it stands isolated in this position which is being rejected by everyone near and far, and why even its closest allies are turning a blind eye to this decision?"

"Palestinians have the right to their own state based on the 1967 borders with East Jerusalem as its capital. This is the main parameter and the only hope for a just and lasting peace in the region," he said.

Çavuşoğlu also called the U.S.' threats to cut development aids to countries who vote 'no' at the assemblyoutright "bullying" and completely "unacceptable."

The top diplomat also urged the U.N. to take some serious steps against the move, saying "The U.N. Security Council has failed to fulfill its responsibilities yet again, now this duty falls upon the U.N. General Assembly to bring justice."

"Jerusalem is sacred for all 3 monotheistic religions, it is a humanitarian duty to save the city," he concluded his speech.

Later on, Israeli envoy to the UN, Danny Dannon took the stage.

"The countries who will vote against Israel today are the puppets and marionettes of Palestine," he said.

"The United States will remember being singled out in that assembly," she said.

"America will put our embassy in Jerusalem. No vote in the United Nations will make any difference on that. But this vote will make a difference on how Americans look at the U.N. and on how we look at countries who disrespect us in the U.N." she said.

Venezuela Ambassador to the U.N. Samuel Moncada, speaking on behalf of the Non-Aligned Movement, also slammed the U.S. move and Israeli actions in the holy city.

"We are deeply alarmed by Israeli actions in Jerusalem. We deplore each and every violation of international law," he said.

Pakistani Ambassador to the U.N., Maleeha Lodhi was the next diplomat to take a stand.

"A viable Palestine within the pre-1967 borders and with Al-Quds as its capital remains the only sustainable plan. No other plan will succeed, no other plan will be acceptable for us," she said, adding that Pakistan is "always on the side of Palestine."

After Lodhi, the representative of Indonesia Ambassador Dian Triansyah Djani pointed to the importance of Jerusalem for the region, Palestinian people and the peace.

"Jerusalem / Al-Quds is a final status issue that must be resolved through negotiation between the two [Israeli, Palestinian] parties," he said.

The session was requested by Turkey and Yemen on behalf of the Arab group of countries and the Organization of Islamic Cooperation (OIC).

The decision was voted on on Tuesday at the UNSC, but the U.S., as a permanent member, vetoed the draft resolution on the status of Jerusalem.

In the 193-nation General Assembly, however, no country has veto powers, contrary to the UNSC where the United States, Britain, China, France and Russia can block any resolution.

The U.S.' veto on Tuesday, the sole dissenter of the 15-member UNSC, has left the U.S. alone in the international arena. In addition, the shift in longstanding U.S. policy on Jerusalem has sparked angry demonstrations in the occupied Palestinian territories and many Muslim countries.