At least 9 killed after gunman attacks church near Egypt's Cairo 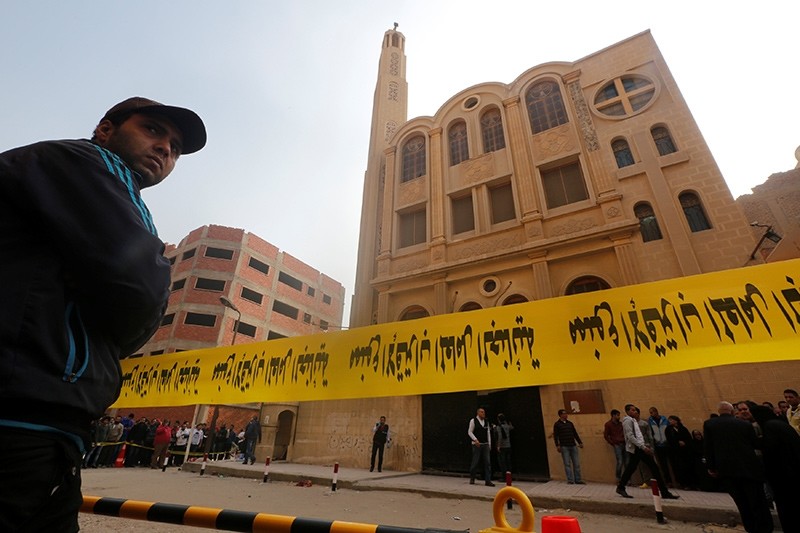 Police tape cordon is seen at the site of attack on a church in the Helwan district south of Cairo, Egypt December 29, 2017 (Reuters Photo)
by Compiled from Wire Services
Dec 29, 2017 12:00 am

Egypt's Health Ministry spokesman says at least nine people, including eight Coptic Christians, have been killed in an attack outside a south Cairo church which was claimed by Daesh.

Khaled Megahed says Friday's attack took place when gunmen on a motorcycle opened fire outside Mar Mina church. One gunman was shot dead as was a security officer, he said.

Egypt's state-run MENA news agency, citing an unnamed Interior Ministry official, said the other assailant fled the scene and was being pursued.

The spokesman for the Coptic Orthodox Church said in a statement that at least six people were killed in the attack including five Copts and a policeman. It also said there was a separate attack on a store in the same neighborhood of Helwan that killed two Copts.

Cellphone footage posted on social media appeared to show the bearded gunman wearing a bulky ammunition vest sprawled on a street, barely conscious, as people restrained his arms and then handcuffed him.

The Daesh terrorist group's affiliate in Egypt has killed dozens of Christians in church bombings and shootings over the past year, and has threatened further attacks against the minority.

Egypt's Coptic Christians make up about 10 percent of the country's 93 million people, and are the largest religious minority in the region.

Daesh had claimed a suicide bombing of a Cairo church in December 2016 followed by bombings of two churches north of the capital in April.

A month later, Daesh gunmen shot dead about 30 Christians south of Cairo as they traveled to a monastery.

The terrorists are believed to have also carried out a massacre of Muslim worshippers in Sinai last month, killing more than 300 in an attack on a mosque associated with the mystical Sufi strand of Islam which Daesh views as heretical.

Egypt imposed a state of emergency following the church attacks and shootings, and President Abdel Fattah al-Sisi demanded the army quell the terrorists with "brutal force" following the mosque massacre.

The group has been waging a deadly insurgency based in the Sinai peninsula bordering Israel and the Gaza Strip that has killed hundreds of policemen and soldiers.