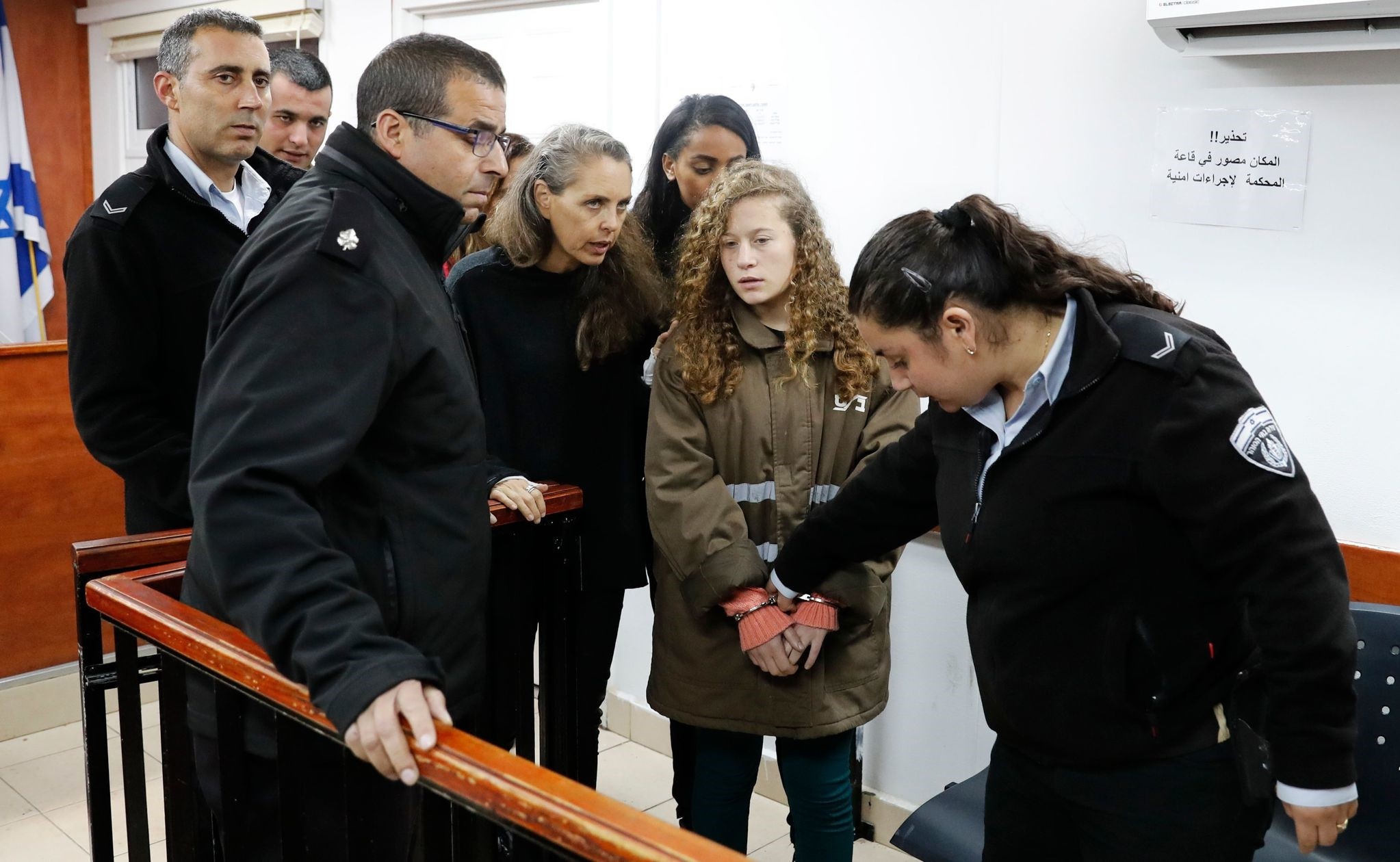 Israeli lawyer Gaby Lasky (C-L) speaks with her client sixteen-years-old Ahed Tamimi (2R) before she stands for a hearing in the military court at Ofer military prison in the West Bank village of Betunia on January 1, 2018. (AFP Photo)
by Daily Sabah with Reuters Jan 01, 2018 12:00 am

Israel indicted a 16-year-old Palestinian girl on Monday on charges including assault for punching an Israeli soldier in the face two weeks ago, an incident which made her into a hero for Palestinians and was seen as humiliating by right-wing Israelis.

Israel has held Ahed Tamimi since arresting her three days after she was filmed punching the soldier at the entrance to her family home in a village in the occupied West Bank. The confrontation took place after Israeli soldier assaulted Tamimi and the Palestinian girl responded, witnesses said.

The case has made her into such a symbol for Palestinians that a commentator in Israeli left-wing newspaper Haaretz said Israel risked turning her into the "Palestinian Joan of Arc".

The 12 charge sheet against Tamimi, seen by Reuters, included counts of aggravated assault against a soldier, who the army said was bruised on his brow by her punch, obstructing a soldier in the performance of his duty and throwing stones at troops.

"Tamimi threw stones at them (the soldiers), threatened them, obstructed them in fulfilling their duty, took part in riots and incited others to take part in them," the military said on its public affairs Twitter account.

Tamimi's lawyer, Gaby Lasky, said she was certain some of the charges would eventually be dismissed, but nonetheless prosecutors may seek the maximum penalty for other counts.

"I am sure they want to keep her as long as possible because they don't want the voice of resistance outside prison," Lasky told Reuters at the military courtroom in Ofer prison near the Palestinian city of Ramallah.

Tamimi was not asked to enter a plea at this stage. The military court gave her lawyer more time to study the charges.

An adult found guilty of assaulting a soldier could be jailed for up to 10 years, but such an outcome would be unlikely for Tamimi as a minor.

The incident occurred at the entrance to Tamimi's family home in the West Bank village of Nabi Saleh, where weekly protests against Israeli settlement policy have been held for years. Tamimi's father is a prominent Palestinian activist.

In 2012 she was presented with an award in Turkey and met President Recep Tayyip Erdoğan, after images of her confronting an Israeli soldier went viral.