Turkey, Russia warn US against interference in Iran's domestic politics 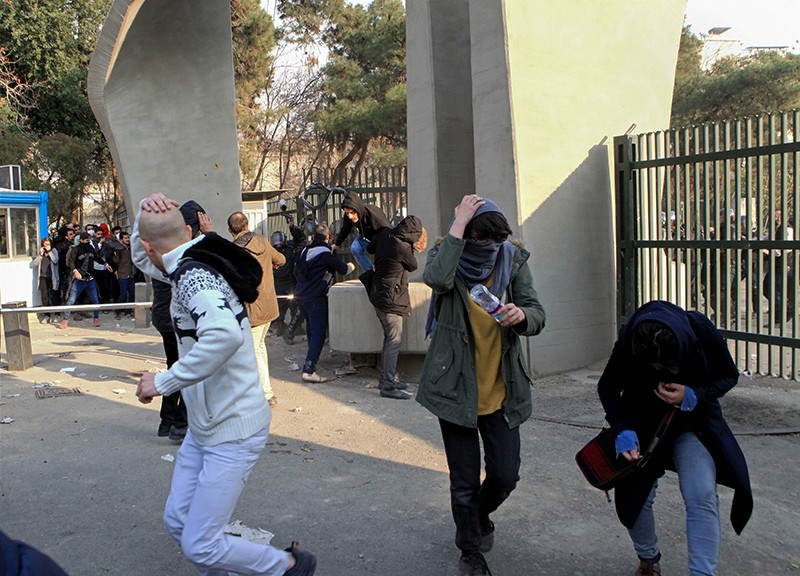 In this photo taken Dec. 30, 2017, by an individual not employed by the Associated Press and obtained outside Iran, university students run away from police during an anti-government protest inside Tehran University, in Tehran, Iran. (AP Photo)
by Daily Sabah with Agencies Jan 04, 2018 12:00 am

Turkey and Russian on Thursday warned external parties, particularly the United States, against attempting to interfere in Iran's domestic politics.

Presidential Spokesperson İbrahim Kalın said such actions could provoke a backlash, after six days of anti-government protests in Iran.

"We do not accept interventions to distort peace in the Iranian society with tweets. We hope that this problem will be overcome lawfully. Peace in Iran is of great importance to us," he said.

Kalın, also told reporters during a news conference in Ankara that while Iranian citizens had the right to hold demonstrations, it was not possible to accept acts that cause casualties and property damage, as the protests have left 21 people dead.

"Despite the many attempts to distort what is really going on (in Iran), I am sure that our neighbor, our friend, will overcome its current difficulties," Ryabkov said.

He also criticized a call by U.S. Ambassador to the United Nations Nikki Haley for an emergency U.N. Security Council meeting to discuss the violence.

Iran on Wednesday angrily accused the U.S. at the U.N. of meddling in its domestic affairs.

U.S. President Donald Trump has expressed his support for protesters who have been staging rallies across Iran over the past week against the country's government.

Last Thursday, Iranians took to the streets in the northeastern cities of Mashhad and Kashmar to protest rising inflation and perceived government mismanagement, according to local media reports. These protests were followed on Saturday and Wednesday by large demonstrations in support of the government. Since the demonstrations began six days back, at least 21 people have been killed — including a police officer — while hundreds more have reportedly been detained.