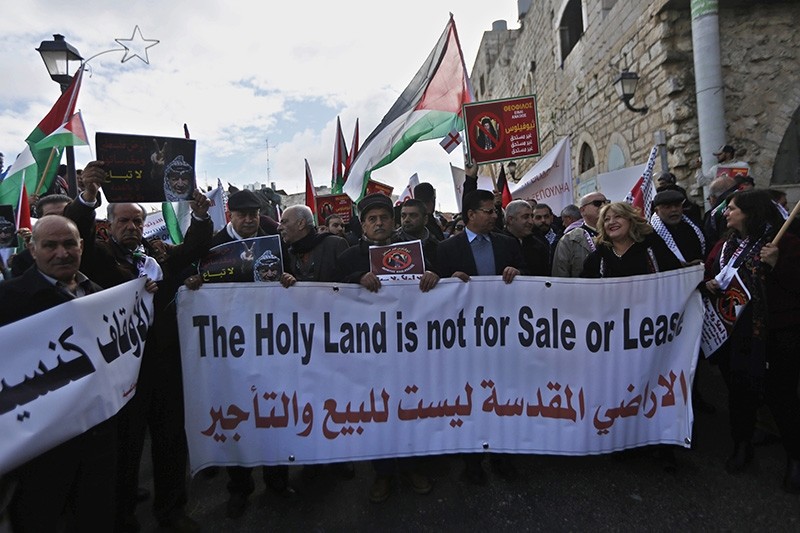 Scores of Palestinians blocked the convoy of Greek Orthodox Patriarch Theophilos III of Jerusalem in the West Bank city of Bethlehem on Saturday in a row over land sales to Israel.

Protesters threw eggs at the Patriarch's procession as he arrived in the city to attend Christmas Eve in the Church of the Nativity, which Christians believe marks the birthplace of Jesus Christ, at midnight.

Demonstrators accuse the Patriarch of signing deals with Israel to sell and rent endowments of the Orthodox Church.

Earlier on Saturday, scores of demonstrators rallied in Bethlehem to call for boycotting the patriarch, whereas the municipalities of Bethlehem, Beit Sahour and Beit Jala, all in the Israeli-occupied West Bank, called for the patriarch's boycott.

The mayor of the Christian town of Beit Jala, near Bethlehem, said he wanted Theophilos removed from his post over controversial sales of church land to Israeli settlement groups in mainly Palestinian east Jerusalem.

"Our move today is a protest against the patriarch over the sale of land of the Orthodox," mayor Nicola Khamis told AFP.

The church elected Theophilos in 2005 after dismissing his predecessor Irineos over an alleged multi-million-dollar sale of church land to Jewish buyers.

But Khamis says the practice continues.

"Theophilos ignored all the demands and continued selling this land even if the (Christian) majority is against it," he said.

"Today we are taking a stand to say the patriarch must stop the selling of the land."

Property transactions with Jewish buyers anger Palestinians, who see Israeli-annexed east Jerusalem as the capital of their promised state.

The Greek Orthodox Church owns large amounts of land throughout Jerusalem, including the land Israel's parliament, the Knesset, is built on.

In 2005, the Palestinian-run Petra and Imperial hotels were sold by the church to Ateret Cohanim, a group that works to establish a Jewish majority near the Jaffa Gate entrance to the Old City of East Jerusalem.

In August, Theophilos himself denounced an Israeli court ruling upholding deals made before his appointment between the church and Ateret Cohanim.

He said the church would appeal to Israel's Supreme Court over the ruling.

According to Israeli media, the 2004 agreements were for 99-year leases on hotel properties near Jaffa Gate.

The church went to court against Ateret Cohanim, claiming the deals were signed illegally and without its authorization.

The Greek Orthodox Church is the biggest and wealthiest Christian Church in the Holy Land.

Eastern Christians celebrate Christmas on January 7, while those in the West observe it on December 25 due to differences between the Julian and Gregorian calendars.