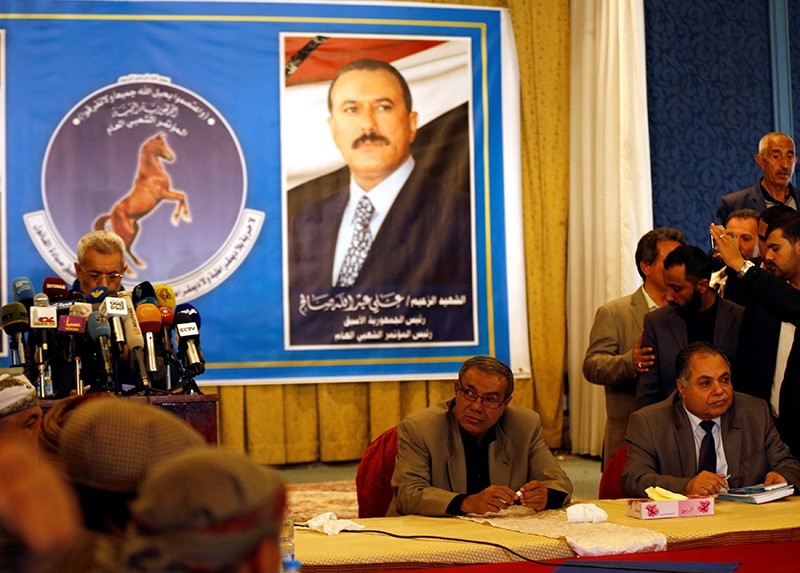 Sadeq Amin Abou Rass (2nd R) who was picked to succeed Yemen's slain former president Ali Abdullah Saleh as a leader of the General People's Congress party, attends a meeting of the party's leadership in Sanaa, Yemen Jan. 7, 2018. (Reuters Photo)
by Jan 07, 2018 12:00 am

The party of former Yemeni president Ali Abdullah Saleh named a new leader Sunday after he was killed last month by the Iran-aligned Houthi movement, his one-time allies in the country's civil war.

Questions have arisen over where the loyalty of the General People's Congress (GPC) fighters lay after Saleh was killed in a roadside attack after switching sides, abandoning the Houthis in favor of a Saudi-led coalition.

Sunday's announcement condemned the Saudi "aggression" and said the party would keep resisting, but did not mention the Houthis. It said Sadeq Amin Abou Rass, a former agriculture minister, had succeeded Saleh.

Saleh's exiled son Ahmed Ali Saleh, had vowed to lead a campaign against the Houthi movement after his was killed, but the statement on Sunday did not mention his name either.

Yemen's war, pitting the Houthis who control the capital Sanaa against the Saudi-led military alliance backing a different government based in the south, has resulted in what the United Nations calls the world's worst humanitarian crisis.

"What happened (Saleh's killing) will not prompt us to make peace with the aggressors against the sovereignty, the dignity and the freedom of our great Yemeni people," the statement said.

It also called for releasing all the party's prisoners, including Saleh's family members and employees of his TV channel Yemen al-Yawm, detained by the Houthis -- held after Saleh switched sides.

The statement said the party remained open to all Yemeni factions and national reconciliation.

The Saudi-led coalition has called on party members to join the internationally recognized government and offered an amnesty to its fighters.

For months, the Houthis have retaliated with attacks on Saudi Arabia from its mountainous strongholds in northern Yemen and has launched around a dozen ballistic missiles at the kingdom, all of which were intercepted.