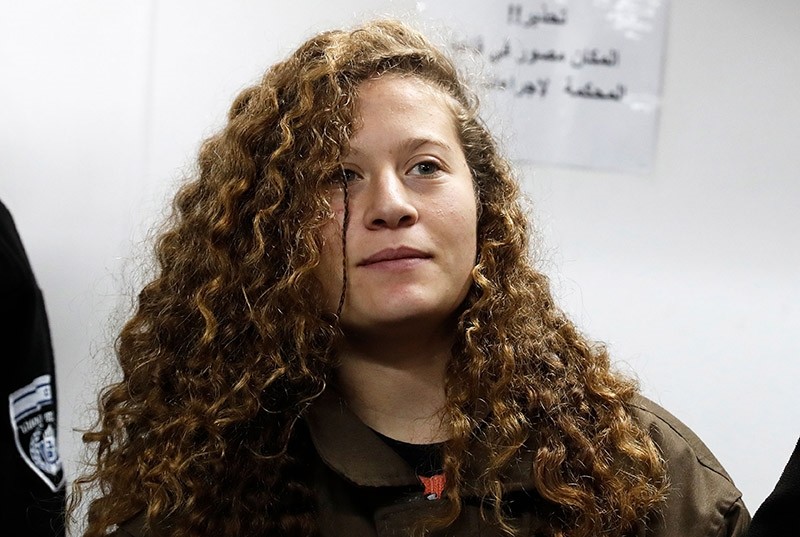 Sixteen-year-old Ahed Tamimi stands for a hearing in the military court at Ofer military prison in the West Bank village of Betunia, Jan. 1, 2018. (AFP Photo)
by Anadolu Agency Jan 08, 2018 12:00 am

The U.N. on Monday voiced concern over the detention of 16-year-old Palestinian activist Ahed al-Tamimi.

"What is clear is that people need to have their rights respected. The detention of children is our particular concern and we have made those concerns known," U.N. spokesman Stephane Dujarric told reporters.

Al-Tamimi is well known for her bold activism for a free Palestine. Videos and pictures of her confronting and slapping Israeli soldiers have been viral for weeks.

Earlier, the teenager and her mother Nariman were ordered to be detained behind bars for an additional eight days by Ofer Court, located near the West Bank city of Ramallah.

The U.N. spokesman also expressed deep concern for the safety and protection of tens of thousands of people in southern Idlib and rural Hama in northeastern Syria.

"With the seventh winter of the conflict underway, more than 13 million people need basic aid and protection. While some parts of Syria are witnessing a welcome reprieve from hostilities, many others face intensified military operations and conflict," Dujarric added.

"He will assess the humanitarian response and discuss how to improve access and delivery with key interlocutors," he added.