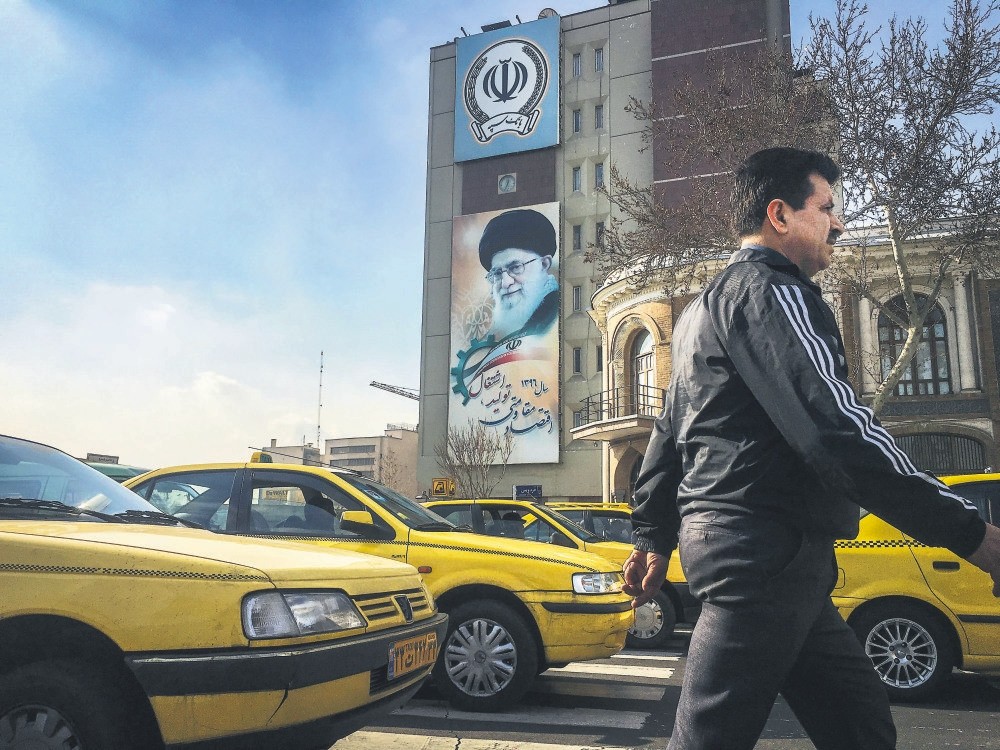 After several days of anti-regime protests in Iran, the streets have returned mostly to normal.
by Yunus Paksoy Jan 09, 2018 12:00 am

Iranians returned to their homes for fear of foreign intervention with direct support from the U.S. and Israel for the recent protests, but nevertheless, if Iranian President Rouhani does not ride the wave of public discontent, the country may face a new series of revolts

Looking over her shoulder, Firuzeh warily throws a glance around to make sure that officers do not see her chatting with strangers in public. "The economic situation is too difficult for us now," she says, recounting the violent protests across Iran only weeks ago. Having sprouted in the conservative northeastern city of Mashhad, a sacred city for the whole country, demonstrations against the regime swiftly spread throughout Iran. Worsening living conditions have infuriated a remarkable portion of society for a while. Unemployment in the country stands at 12.5 percent, and nearly one in four young Iranians are jobless.

Insufficient minimum wage, delayed retirement pensions, soaring food and oil prices, a recent cut in subsidies for the poor and corruption allegations after intra-state conflicts stand out as the preeminent factors.

Over-the-top expectations regarding economic dividends following the historic nuclear deal inked with world powers in 2015 have also played a key role in the exasperating process.

Fixated on the belief that the lifting of the sanctions on Iran would catapult the economy, millions of Iranians are now against President Hassan Rouhani, who was re-elected last May with nearly 60 percent of the vote.

Alireza Bagheri, a tradesman who drives people around Tehran as a side job, presumes Iranians would be economically much better off if somebody other than the current powers at the helm run the country. "Our income is never enough. One has to have two or three jobs to make ends meet every month," he explained.

The sociological façade of the protests, in fact, is another side of the story. Nearly 40 years after the Iranian Revolution, there is still a notable part of the public disgruntled with the oppression they have to endure day in and day out.

Firuzeh is undoubtedly one of them. A photographer in her 30s, she mostly complained about regulations that affect daily life. "We don't have any freedom. We can't go dancing, and we can't talk much with men in public." She remembers being cautioned by female police officers on more than one occasion for talking to men on the street.

She wears her mandatory headscarf, but barely in line with the rule. Despite the countrywide law that compels women to cover, many women leave one-third of their hair uncovered as a silent protest against the regulation, showing off their dyed and well-styled hair and wearing heavy makeup.

While practices of the Iranian regime plague some, not everyone has difficulties with the existing rights and freedoms. "What is freedom?" asked Darius, a taxi driver, and then gives the answer himself: "It is returning home safe and sound every single day. The regime provides that."

The 52-year-old has serious doubts about those discontented with the current situation. "Their perception of more rights and freedoms is being free to openly drink alcohol, have less clothes on in public and do whatever dirty stuff they like."

According to him, the fact that there is not a common sense of rights and freedoms embraced by all in Iran generates a political squabble regarding the existence of the regime in the end.

Even though there have been several outstanding economic and social factors paving the way for an uprising against the establishment and Rouhani, the protests, which erupted on Dec. 28, fizzled out in a week. Also, the number of protesters in the streets remained well below what was expected.

Most Iranians suggest that people were relatively scared to take to the streets, fearing a violent backlash from the state. Indeed, the regime responded harshly against protesters across the country. At least 20 people have been killed so far in clashes since the start of the protests, per official figures.

Reservations with regard to foreign conspiracies in the minds of Iranians, above all, kept many out of the equation. Beyond a shadow of doubt, U.S. President Donald Trump's tweets only a couple days into the protests changed the picture for many Iranians.

"Many reports of peaceful protests by Iranian citizens fed up with regime's corruption and its squandering of the nation's wealth to fund terrorism abroad," he tweeted on Dec. 30. Then on the first day of 2018, he said it was "time for change." Furthermore, on Jan. 3, he pledged support to those willing to overthrow the regime when the time comes. "You will see great support from the United States at the appropriate time."

As if Trump's quick backing of the protesters was not enough to make some of the population believe there was foreign meddling involved, Israeli Prime Minister Benjamin Netanyahu added fuel to the fire. "When the regime finally falls – and one day it will – Iranians and Israelis will be great friends once again. I wish the Iranian people success in their noble quest for freedom," he said in a video message on Jan. 1.

In spite of being disgruntled with worsening living conditions, many Iranians took a step back after Trump and Netanyahu, the leaders of two hostile states, expressed support for the protests so early. "There are of course problems, but we are aware of the foreign plots against us," Darius said. "The ambiance behind [the protesters] was strong because it came from the United States and Israel."

The Iranian regime also contends there is evidence that foreign actors were engaged in ramping up the protests. "We have hard evidence of the violence in Iran by a number of the protesters leading to the deaths of police and security officers, very clearly directed from abroad," Iranian ambassador to the United Nations Gholam Ali Khoshroo said on Friday.

Another reason why the protests died down so quickly is seen in Tehran as the lack of organization and a leader during the demonstrations. "Those taking part in the protests are not members of legally established parties, foundations, associations or labor unions," an analysis from the Foundation for Political, Economic and Social Research (SETA) in Ankara said last week. Most protesters communicated via banned social media applications to gather; yet, they were far from being organized.

The head of Iran's Islamic Revolutionary Guard Corps claimed the protests to be over on Wednesday, and the eerily normal mood in Tehran and elsewhere points to this. The city is buzzing with people, daily life continues without any obstruction and the signs of violence are hardly discernible.

However, the risk continues to exist, which is something Rouhani palpably acknowledges. "According to the constitution and citizens' rights, people are free to express their criticism and to protest. … It should be in such a way that it leads to the improvement of the people and state," Rouhani said with regard to the protests, instead of lashing out in fury.

The president has now earned himself time to turn the tide. Exacerbating economic woes, lingering corruption allegations and social uneasiness, though, may one day drag some Iranians to the streets again.

Stopping at the famous Azadi Square, Darius shared his own counsel as he said goodbye: "It is no time to fool around."