Over 300 arrested, dozens hurt after third night of unrest in Tunisia 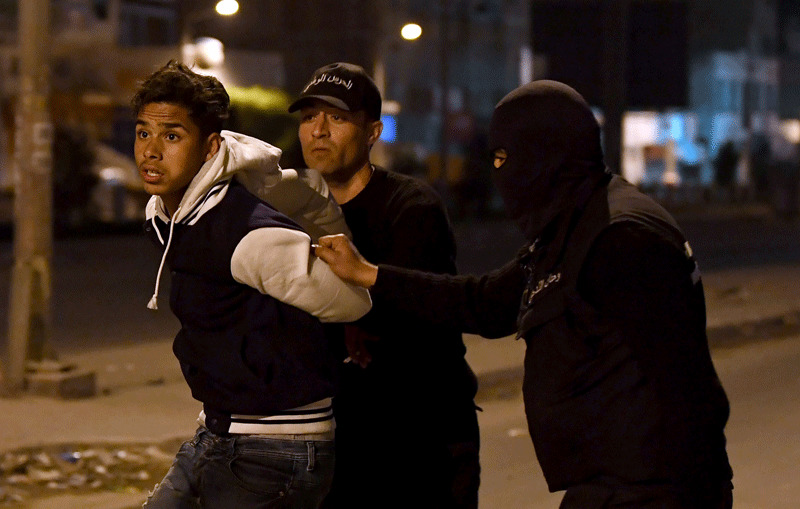 Tunisian security forces detain a protester in the Ettadhamen on the outskirts of Tunis late on January 10, 2018, after price hikes ignited protests in the North African country. (AFP Photo)
by Compiled from Wire Services Jan 11, 2018 12:00 am

Tunisian authorities have arrested 328 people over involvement in "subversive" acts after a third night of protests against price and tax increases, the Interior Ministry said Thursday.

Some 21 security personnel were also injured and 10 police vehicles damaged in the overnight unrest, he added.

Anti-government demonstrations erupted this week in several areas in Tunisia in protest against the hikes in the prices of some goods and a levy of new taxes.

One protester was killed on Monday during demonstrations in the town of Tebourba, west of Tunis.

Lootings of stores and attacks on security facilities were also reported.

Tunisia is widely seen as the sole democratic success story of the 2010-11 Arab Spring uprisings.

The country has been in the grip of an economic slowdown resulting from the unrest that followed the 2010 revolt and a series of attacks by militant insurgents.

While Tunisia is widely seen as the only democratic success story among "Arab Spring" nations, it has also had nine governments since the overthrow of authoritarian leader Zine El-Abidine Ben Ali, none of which have been able to deal with growing economic problems.

"Three hundred and thirty people involved in acts of sabotage and robbery were arrested last night," interior Ministry spokesman Khelifa Chibani said bringing the number of detainees since the protests began to around 600. The army was also deployed in several other cities, including Sousse, Kebeli and Bizert to protect government buildings that have become a target for protesters.

The government has defended the recent price and tax increases, saying they are necessary to revive the economy and curb budget deficit.

The opposition has backed the street protests and called on the government to scrap the austerity measures.

On Tuesday night, hundreds of young people took to the streets of Tebourba for the funeral of the man who died.

Police have insisted they did not kill him. Health Minister Imed Hammami said that results of an autopsy would be made public on Thursday.

Unrest was also reported in the working-class neighborhoods of Djebel Lahmer and Zahrouni on the outskirts of Tunis, the central cities of Gafsa and Kasserine, and the northern town of Jedaida.

In the central town of Sidi Bouzid, the cradle of the protests that sparked the 2011 uprisings, youths blocked roads and hurled stones, and the police retaliated with tear gas, an AFP reporter said.

A representative of Tunisia's Jewish community said two Molotov cocktails were thrown at the entrance to two Talmudic schools on the Mediterranean island of Djerba, but their interiors were not damaged.