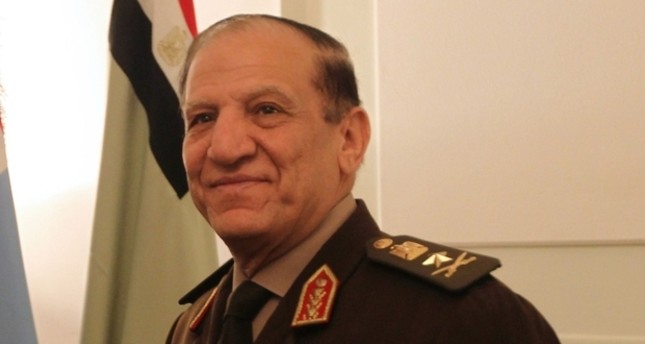 A former Egyptian army chief of staff will contest the upcoming presidential elections in March, said a top aide on Friday, as other candidates have faced heavy pressure to drop out and pave the way for a sweeping re-election victory for the army-chief-turned-President Abdel-Fattah Sisi.

Ragab Helal Hemida, the head of the policies committee in the Egypt Arabism Democratic party, told The Associated Press on Friday that Lt. Gen. Sami Annan has accepted his party's candidacy nomination. He added that Annan will hold a press conference at the party's headquarters soon to announce his decision. Elections are scheduled to take place on March 26-28.

Hemida said that Sisi's popularity has taken a blow after painful austerity measures saw a large sector of Egyptians falling into poverty or economic hardship. He added that under Sisi Egypt's human rights record has sharply deteriorated.

Sisi's re-election appears to be a forgone conclusion and he is expected to secure an easy victory for a second four-year term. Other candidates have faced immense pressure to drop out.

The most serious challenger to Sisi, former Prime Minister Ahmed Shafiq, came under pressure to withdraw his candidacy after he was allegedly deported from the UAE — where he was self-exiled — shortly after he announced his presidential bid. Shafiq, an ex-air force general who finished a close second behind Mohammed Morsi in the 2012 election, is believed to have been forced to issue a statement rescinding his intention to run and placed under house arrest.

Another hopeful, Army Col. Ahmed Konsowa, was court martialed and sentenced to six years in prison for breaching military regulations prohibiting political activism. Prominent rights campaigner Khaled Ali would not be eligible to run if he loses his appeal against a conviction last September on charges of making an obscene gesture in public.

After the election of the country's first democratically elected President Mohammed Morsi in 2012, Morsi fired both Annan and the head of the military council, Field Marshal Mohammed Hussein Tantawi, amid mistrust and fallouts between Brotherhood and the army. Annan and Tantawi — popularly referred to as "Sisi's godfather" — were known to be at odds. Since his forced retirement by Morsi, Annan has retreated from public life.

The 69-year-old Annan had strong ties with the U.S. under and after Mubarak as he was tasked with trips to Washington to negotiate U.S. aid to the country. He is considered a pragmatic figure open to compromise and political dialogue with all rivals, including the now-outlawed Muslim Brotherhood group. The country's oldest conservative organization became the government's number one enemy and was crushed in a heavy security crackdown after the ouster of Morsi by the military in July 2013. The army chief at the time, Sisi won the first post-Morsi presidential vote with a landslide victory.

Hemida said that Sisi has adopted a hostile attitude toward Annan after feeling threatened by Annan's declaration to contest the 2014 elections, which he later rescinded. Annan has not been invited to any official ceremonies headed by Sisi, he said.

Hemida added that Shafiq was forced by authorities to drop his presidential bid and that he is currently confined. "All his phones are turned off ... no one goes to his house and only his lawyer and a few people are allowed to visit him," he said.

Asked if Annan could face the same pressures, he said "this is possible... but if they do so, they would be very stupid."