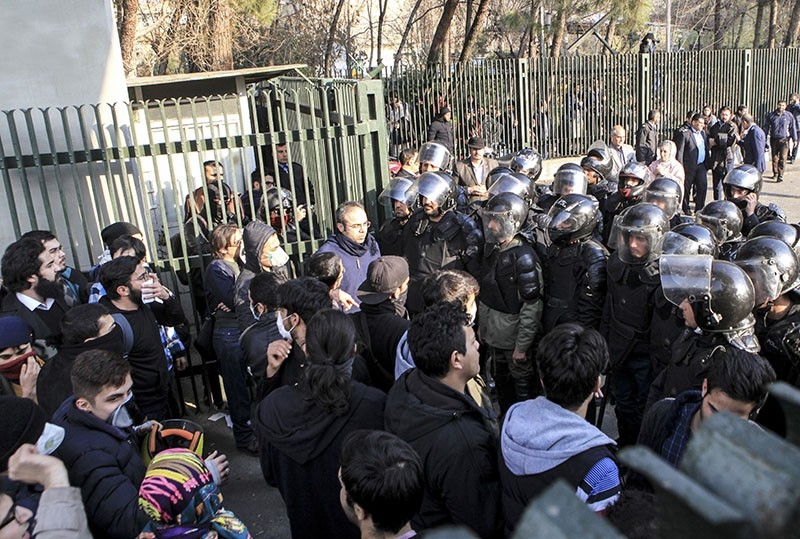 In this Dec. 30, 2017 file photo taken by an individual not employed by the AP and obtained by the AP outside Iran, anti-riot Iranian police prevent university students to join other protesters over Iran weak economy, in Tehran, Iran. (AP Photo)
by Compiled from Wire Services Jan 14, 2018 12:00 am

Iranian officials said Sunday that hundreds of people detained in recent weeks during anti-government protests have been released and acknowledged that at least 25 people were killed during the unrest.

The demonstrations that erupted in a number of towns and cities were the largest seen in Iran since the disputed 2009 presidential election, but authorities say the unrest has waned in recent days, and the security forces insist they have restored order.

It was not clear how many Iranians are still detained elsewhere, and the largest and most violent of the demonstrations were held in the provinces. Last week, an Iranian reformist lawmaker, Mahmoud Sadeghi, said some 3,700 people were arrested across the country.

The protests, which began three weeks ago, were initially sparked by anger at the weak economy and official corruption, but escalated rapidly, with some protesters calling for the overthrow of the government and clashing with security forces.

Ejehi, the judiciary spokesman, said Sunday that at least 25 people were killed in the clashes, while insisting that none died at the hands of security forces. Officials had previously said 21 people were killed.

"Twenty-five people, ordinary citizens and our own forces, were killed during the recent troubles," Ejehi said according to the Mizanonline news agency.

"None were killed by shots from the security forces because they were ordered not to use their weapons," he added.

He provided no details on how the members of the security forces or civilians were killed, including six protesters who died while trying to storm a police station in the central province of Isfahan.

The figure was four more than the death toll announced during the unrest that spread across the country between December 28 and January 1.

Iranian officials have acknowledged the widespread anger over the economy, which remains weak despite the lifting of international sanctions under the 2015 nuclear agreement with world powers. But they have portrayed the violence as part of a conspiracy by the United States, Israel and other countries to try to overthrow the clerically-overseen government.

The United States and Israel have expressed support for the protests but deny any involvement in them.

The government has said a total of 42,000 people participated in the unrest -- a figure that is hard to verify due to limited information from the provinces where most of the unrest took place.