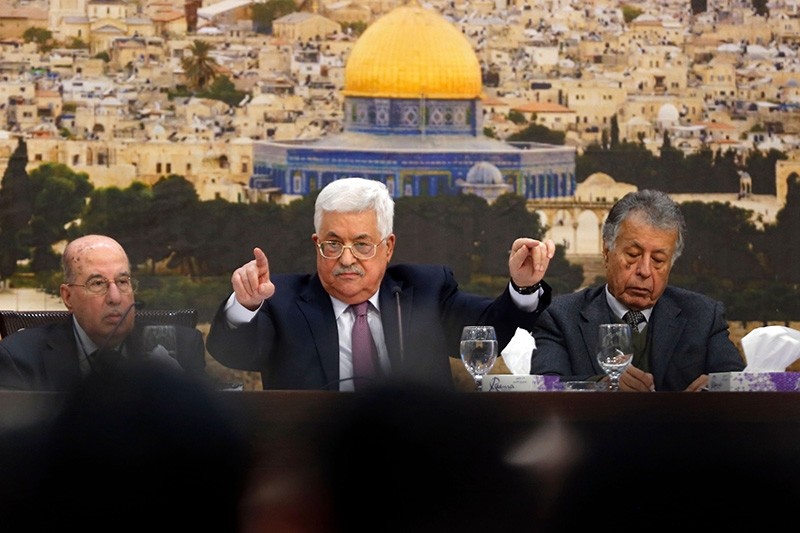 At a key meeting Sunday on the White House's declaration of Jerusalem as Israel's capital Palestinian Authority President Mahmud Abbas denounced U.S. President Donald Trump's peace efforts as the "slap of the century."

Abbas made the comments at the start of a two-day meeting in Ramallah of the Palestinian Central Council, Palestine's highest decision-making body, where 95 delegates a debated future strategy.

In the buildup to the meeting on Sunday and Monday, Palestinian officials had stressed that all options were on the table to respond to Trump, including suspending the Palestinian Liberation Organization's (PLO) recognition of Israel, according to Agence France-Presse (AFP).

Abbas did not mention recognition but said the Oslo accords that led to the creation of his Palestinian Authority and envisioned a final resolution to the conflict were in effect finished.

"I am saying that Oslo, there is no Oslo. Israel ended Oslo," he said, referring to persistent Israeli settlement building and other issues seen as eroding the possibility of a two-state solution to the conflict.

"We will not accept anything the United States may try to impose on us and we will not accept its mediation following that crime," Abbas said, referring to Trump's Jerusalem decision, as reported by Reuters.

Palestinian officials have said they will not meet with U.S. Vice President Mike Pence when he visits Egypt, Jordan and Israel this month.

Since 2002, a quartet of Middle East peace negotiators of the United States, Russia, the European Union and United Nations has been assigned to promote peace efforts, but has failed to get any result.

Trump's recognition of Jerusalem as Israel's capital reversed decades of U.S. policy and has enraged Palestinians and triggered violent protests in Jerusalem, the occupied West Bank and the Gaza Strip. Israel considers Jerusalem to be its eternal, indivisible capital and Palestinians want East Jerusalem as the capital of their future state. Israel captured east Jerusalem in the 1967 Six-Day War and annexed it in a move that is not recognized internationally.

"Jerusalem was taken off the table by a tweet from Mr. Trump. Because of that, we are meeting now because there is nothing more important than Jerusalem," Abbas said.