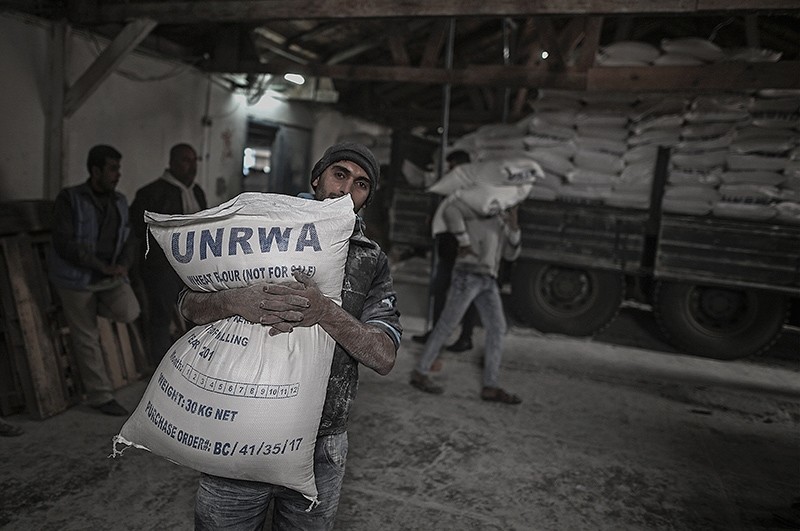 A Palestinian refugee carries a sack with flour at the United Nation food distribution center in al Shateaa refugee camp in the northern Gaza city, Jan. 15, 2018. (EPA Photo)
by Anadolu Agency Jan 18, 2018 12:00 am

Belgium announced Wednesday it will donate €19 million ($23 million) to the UN agency for Palestinian refugees,following a U.S. decision to cut aid for the agency.

The country will allocate the aid in three years, according to a statement issued by Deputy Prime Minister Alexander De Croo.

"For a lot of Palestinian refugees, the UNRWA [United Nations Relief and Works Agency for Palestine Refugees in the Near East] is the last life buoy," said De Croo, adding that the first annual payment would be given immediately.

The U.S. State Department announced on Tuesday it was withholding $65 million in aid to Palestine.

On Dec. 6, U.S. President Donald Trump officially recognized Jerusalem as the capital of Israel and ordered the relocation of the U.S. embassy from Tel Aviv to the holy city.

The U.S. policy shift has triggered outcry in the Arab and Muslim world and a wave of protests in the Palestinian lands that have left at least 16 people dead.

Jerusalem remains at the heart of the Israel-Palestine conflict, with Palestinians hoping that East Jerusalem — occupied by Israel since 1967 — might eventually serve as the capital of an independent Palestinian state.