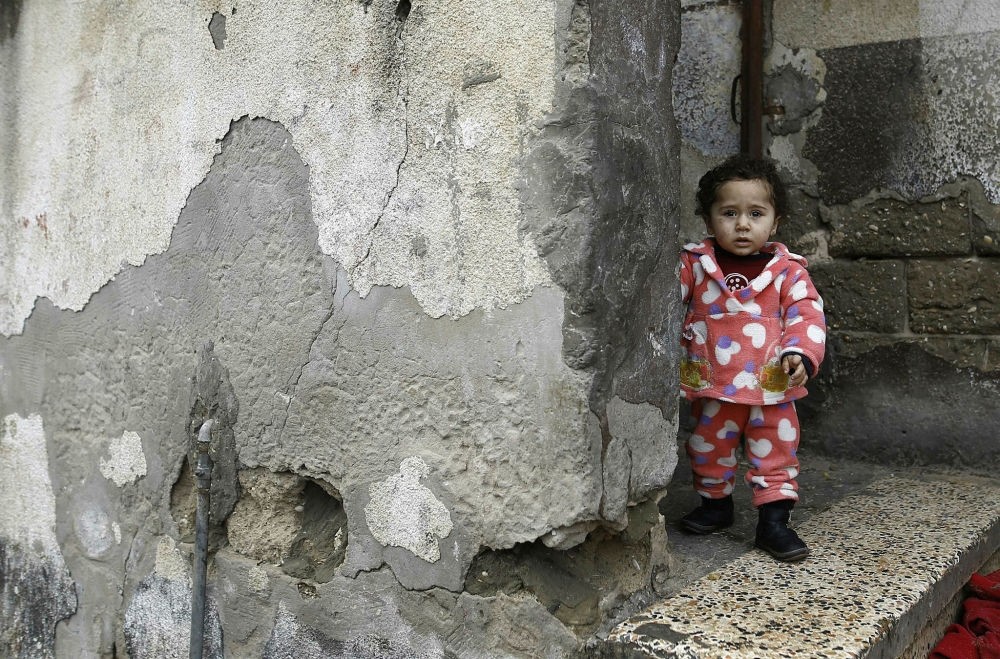 A Palestinian toddler stands outside her family home at the al-Shati refugee camp, Gaza City, Jan. 17.
by Daily Sabah with Wires Jan 18, 2018 12:00 am

After blackmailing Palestinians with threats to cut financial aid, the Trump administration is freezing funding for Palestinian refugees who are in dire need of basic humanitarian services

The Trump administration cut its aid contribution to a U.N. refugee agency for Palestinians refugees thereby targeting the most vulnerable people and depriving them of vital health, educational and food services.

Washington said Tuesday it would provide $60 million to the U.N. Relief and Welfare Agency (UNRWA) while keeping back a further $65 million for now. The U.S. State Department said the UNRWA needed to make unspecified reforms.

The move came after Trump's threatened future payments in the aftermath of the U.S. administration's recognition of Jerusalem as Israel's capital. Palestinian Authority President Mahmoud Abbas last week said "shame on you" for Trump's treatment of the Palestinians and warned he would have no problem rejecting what he suggested would be an unacceptable peace plan.

"Once again the U.S administration proves its complicity with the Israeli occupation by attempting to remove another permanent status issue off the table," said Hanan Ashrawi, a member of the executive committee of the Palestine Liberation Organization, as reported by Palestinian News Network yesterday.

"This administration is thereby targeting the most vulnerable segment of the Palestinian people and depriving the refugees of the right to education, health, shelter and a dignified life," he added.

Due to the power struggle between the Gulf countries, primarily the United Arab Emirates (UAE) and Iran over Gaza, its residents had been suffering from energy shortages. The UAE had conditioned Hamas to hand over the rule to Fatah, which is mainly responsible for delivering electricity and oil to the embargoed city, and it promised to open a new power plant - as the old one was targeted by Israel in 2006 - that would be sufficient to supply the entire energy needs.

Due to the lack of an energy supply, people are predominantly relying on gasoline-fueled generators and solar panels to keep their refrigerators cool and to have access to hot water. Considering that oil prices are high due to the blockade, Gazan people are in a dire situation. Therefore, hundreds of people engaged in a protest against Israel and the Palestinian Authority as international rights groups warn that there might be a total collapse of basic services. With only three hours of electricity available per day, the U.N. warned that half of Gaza's population is in need of humanitarian aid. Israel said it would reduce electricity supplies after the Palestinian Authority limited its payments for power.

Now, the displaced Gazans who live in refugee camps face the cutting of education and health services that depend on the foreign aid.

The head of the U.N. agency that provides aid to Palestinian refugees appealed yesterday for world donations after the U.S. withheld about half its planned funding for the organization, a move he said risks instability in the region.

More than half of the 2 million people in the Gaza Strip, where the unemployment rate is 46 percent, are dependent on support from the UNRWA and other humanitarian agencies.

UNRWA Commissioner-General Pierre Krähenbüh said he would appeal to other donor nations for money and launch "a global fundraising campaign" aimed at keeping the agency's schools and clinics for refugees open through 2018 and beyond.

"At stake is the dignity and human security of millions of Palestine refugees, in need of emergency food assistance and other support in Jordan, Lebanon, Syria, and the West Bank and Gaza Strip," he said in a statement, according to Reuters.

Krähenbüh said 525,000 boys and girls in 700 UNRWA schools could be affected by the fund cut, as well as Palestinian access to primary health care, but he pledged to keep facilities open through 2018 and beyond.

The UNRWA was established following the 1948 Arab-Israeli conflict, with the U.N. General Assembly Resolution 302 (IV) dated Dec. 8, 1949, for the purpose of improving the living conditions of Palestinian refugees and protecting their rights. Since its inception, Turkey has taken an active role in the UNRWA and from July 2017 onward has assumed the vice chairmanship of the Agency's Advisory Commission.