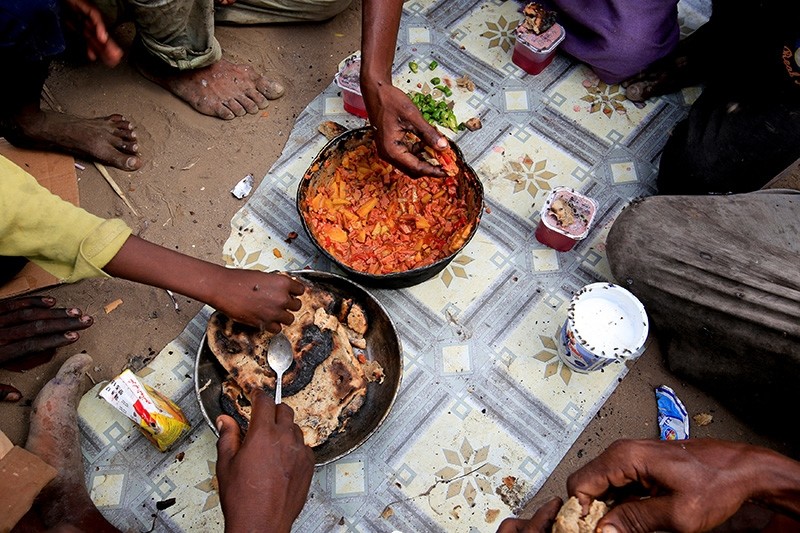 Members of the Ruzaiq family eat a meal outside their hut, next to a garbage dump where they collect recyclables and food near the Red Sea port city of Hodeidah, Yemen, Jan. 9, 2018. (Reuters Photo)
by Daily Sabah with AA Jan 19, 2018 12:00 am

Canada announced Friday it will give a much-needed CAN$12.1 million ($9.7 million) to help those facing starvation in Yemen.

The money brings to CAN$65 million ($52 million) in total aid provided by Canada since a Saudi-led coalition, backed by the United States, began bombing Yemen in March 2015.

The U.N. said earlier this week that malnutrition and disease are "running rampant" in Yemen and millions of children are dependent on humanitarian aid to survive.

Some 8.4 million people are at risk of famine, according to the U.N. humanitarian affairs office (OCHA).

Canada said the balance of the aid would be distributed to various U.N. agencies and the Red Cross.

Of the additional CAN$12.1 million from Canada, CAN$6.5 million ($5.2 million) is slated for the World Food Program to provide food for children under five years of age and pregnant and nursing mothers.

The U.N. said the war has killed more than 10,000 civilians and millions are on the brink of starvation.

"Since the escalation of violence in March 2015, when conflict broke out between forces loyal to President Abdrabbuh Mansour Hadi and those allied to the Houthi rebel movement, Yemen, already the poorest [country] in the region, has been left on the verge of a humanitarian collapse," the U.N. said on its website. "This dire situation in Yemen has perhaps had the worst impact on the three million children born in the country since the conflict erupted."

The U.N. estimated that 30 percent of the newborns were premature, 30 percent had low birth weight and 25,000 died at birth or within one month.

Yemen has been wracked by chaos since 2014, when Houthi rebels overran much of the country, including capital Sanaa, forcing the Saudi-backed government to set up an interim capital in the port city of Aden.

A year later, Saudi Arabia and its Sunni-Arab allies -- who accuse the Houthis of serving as an Iranian proxy -- launched a massive military campaign aimed at rolling back territorial gains by the Houthis.