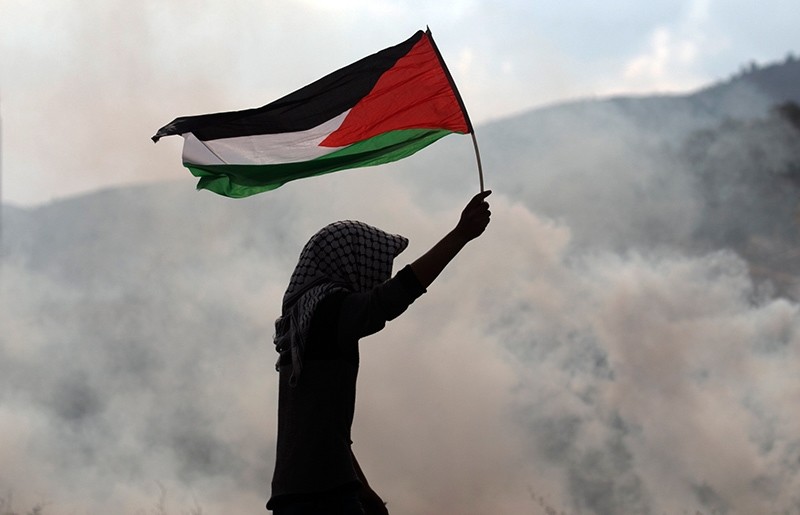 A protester waves a Palestinian flag amid tear gas fumes during clashes with Israeli security forces near the Huwara checkpoint, south of the Israeli-occupied West Bank city of Nablus, Dec. 15, 2017. (AFP Photo)
by Daily Sabah Jan 22, 2018 12:00 am

Slovenia is preparing to recognize Palestine as an independent state in February, a local newspaper said Monday.

Upon recognition of Palestine, the small Balkan country would become only the second EU member, after Sweden, to do so.

According to Delo, discussions on recognition of the State of Palestine are also being held in Portugal, Ireland, Belgium and Luxembourg.

"The relocation of the U.S. embassy means a move away from the two-state solution," Erjavec said, according to Delo.

Referring to U.S. President Donald Trump's controversial decision to recognize Jerusalem as the capital of Israel, Erjavec added: "I think now is the right time for additional support for Palestine."

On Dec. 21, 128 countries rejected Trump's move at the United Nations General Assembly, calling on the U.S. to withdraw the decision.

Jerusalem is a central issue in the Palestinian-Israeli conflict as both sides claim the city as their capital.

Palestinians hope that East Jerusalem — illegally occupied by Israel since 1967 — would serve as the capital of their future state, while Israel views Jerusalem as its "undivided" capital.