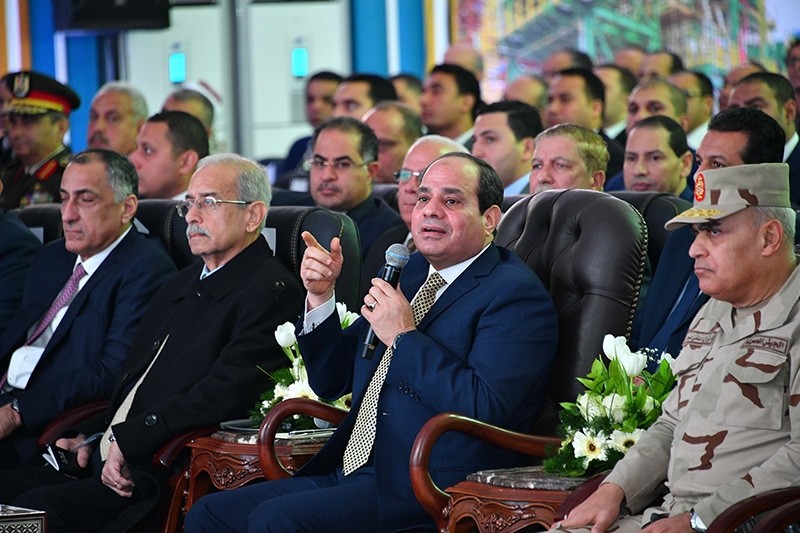 A handout picture released by the Egyptian Presidency on Jan. 31, 2018, shows Egyptian President Abdel Fattah al-Sisi (C) speaking as he attends an official ceremony for the inauguration of the offshore Zohr gas field. (AFP Photo)
by Feb 01, 2018 12:00 am

Egypt's President Abdel Fattah al-Sissi delivered a stern warning on Wednesday to anyone looking to challenge his rule, a day after opposition leaders called for a boycott of the March 26-28 presidential election.

"Be warned. What happened seven or eight years ago, will not happen again in Egypt," Sissi said, a reference to mass protests in 2011 that unseated long-term ruler Hosni Mubarak and ushered in years of political and economic turbulence.

"What didn't work then, will not work now. No ... it looks like you don't know me well," he said at the inauguration of the north African country's mammoth Zohr gas field.

More than 150 politicians and activists called on Tuesday for voters to boycott the March election in which Sissi and a supporter-turned-challenger are the only contenders after a string of other candidates withdrew citing repression.

Those calling for a boycott included lawyer Hamdeen Sabahy, who ran against Sissi in 2014's presidential election, and Hesham Genena, the former head of Egypt's anti-corruption watchdog who had been campaigning for ex-military chief of staff Sami Annan.

Annan was arrested on Jan. 23 and halted his presidential bid after the army accused him of breaking the law by running for office without permission.

Sissi said he could ask Egyptians to take to the streets and give him a "mandate" in the face of what he described as "villains." He did not specify who or what he meant.

"Listen, whoever wants to mess with Egypt and ruin it, has to do away with me first," said Sissi, who was elected in 2014, a year after he led the army to overthrow President Mohamed Morsi.