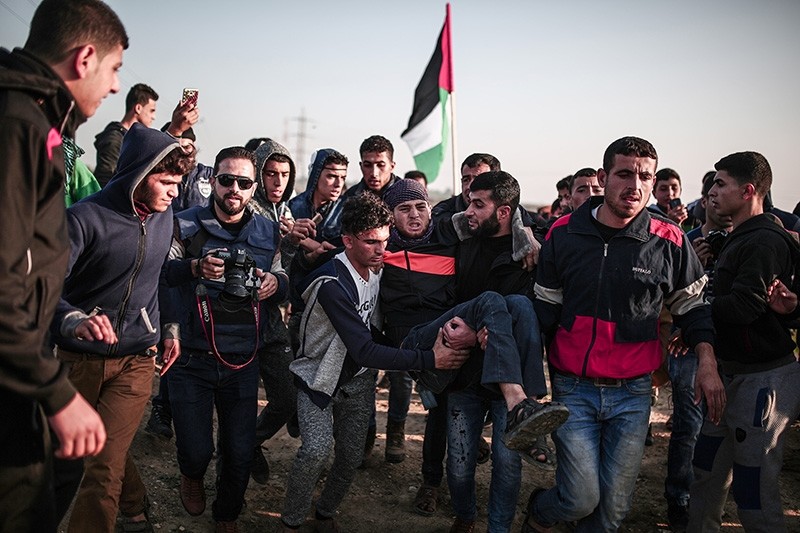 Dozens of Palestinians were injured in Friday clashes with Israeli forces in the occupied West Bank and East Jerusalem, according to a Palestinian NGO.

"Seven Palestinians were injured by live ammunition while three others suffered excessive teargas inhalation," according to a statement issued by the Palestinian Red Crescent (PRC).

"In the city of Qalqilya, meanwhile, two Palestinians sustained injuries from rubber bullets, while another 28 suffered excessive teargas inhalation," the PRC statement read.

And in Nablus, one Palestinian was hurt by live ammunition, while two others were injured by rubber bullets, according to the PRC.

Forty others, it noted, had suffered temporary asphyxia due to teargas inhalation.

On Dec. 6, the U.S. president recognized Jerusalem as Israel's capital, prompting widespread condemnation across the region and angry demonstrations in the Palestinian territories.

Since then, 21 Palestinians have been martyred -- and thousands more injured -- in clashes with Israeli forces in the West Bank, East Jerusalem and Gaza Strip.

Jerusalem remains at the heart of the Middle East conflict, with Palestinians hoping that East Jerusalem -- occupied by Israel since 1967 -- might eventually serve as the capital of a Palestinian state.