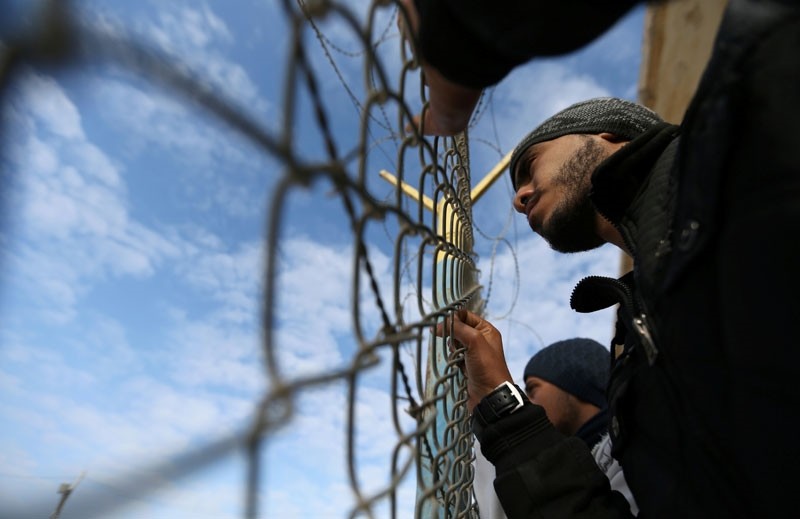 A Palestinian demonstrator stands by a fence during a protest calling on Egypt to open Rafah border crossing, in Rafah in the southern Gaza Strip January 24, 2018. (Reuters Photo)
by Compiled from Wire Services Feb 07, 2018 12:00 am

Egyptian officials say the country has opened its border with the Gaza Strip for the first time this year.

The two officials said Wednesday the Rafah crossing point would operate for three days on a humanitarian basis. Both spoke on condition of anonymity because they weren't authorized to brief the media.

The Palestinian embassy in Cairo confirmed the opening of Gaza's main gateway to the outside world.

Thousands of Gaza residents are on travel lists most of them medical patients, students and holders of residency permits of other countries. Only a few thousand will make it out in the time allotted.

The announcement comes amid warnings of a health-care crisis in Gaza, home to 2 million people.

Blockaded by Israel -- by air, land and sea -- since 2007, the Gaza Strip has seven border crossings linking it to the outside world.

Six of these are controlled by Israel, while the seventh -- the Rafah crossing -- is controlled by Egypt, which keeps it tightly sealed for the most part since the ouster of former President Mohamed Morsi in a 2013 military coup.

Since 2007, the Gaza Strip has suffered a joint Israeli-Egyptian blockade that has deprived the enclave's roughly 2 million inhabitants of their most basic needs, especially food, fuel, medicine and construction supplies. The Gaza Strip largely depends on foreign aid as the economy has stalled under the Israeli blockade, and apart from small industries, industrialization is almost nonexistent.