Thousands of African migrants protest Israeli plan to deport them 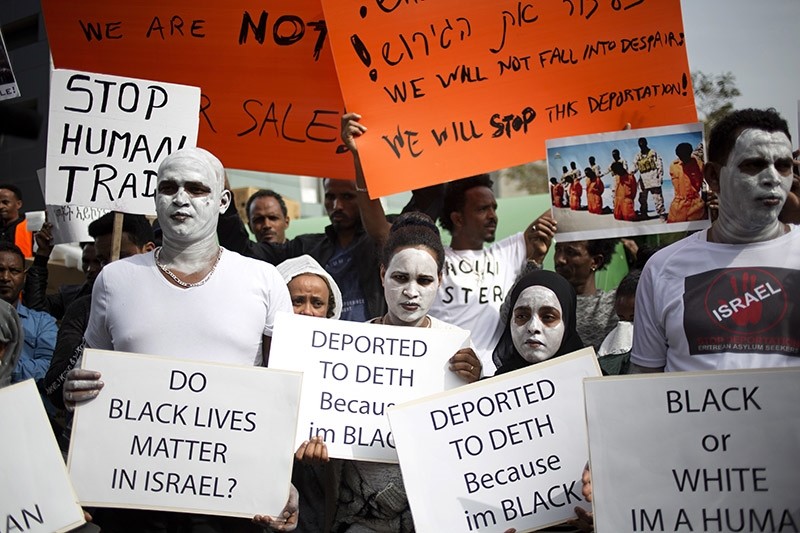 Thousands of African asylum seekers on Wednesday protested outside the Rwandan Embassy in Israel, calling on the African country not to cooperate with an Israeli plan to deport them.

Israel has given thousands of migrants in the country until April 1 to accept an offer to leave for an unnamed African destination — widely known to be Rwanda, based on testimonies of people who have already left — in exchange for $3,500 and a plane ticket. Those who don't leave face indefinite incarceration.

The protesters said the plan would put them in danger and said the deportations were racist. They urged Rwanda and its president, Paul Kagame, not to cooperate. Rwanda is one of Israel's closest African allies.

"Kagame — We are not for sale," said one banner. "Prison or Deportation? What would you choose?" said another. "Would you deport me if I was white?" said another, held by protesters with faces painted white.

Israel has 40,000 migrants, mostly from Eritrea and Sudan, who say they fled from danger at home. Both countries have poor human rights records.

Israel contends that most of the migrants are job seekers and cites complaints that they have transformed working class neighborhoods of south Tel Aviv into unrecognizable slums.

But the migrants and their supporters say those who have left have run into danger in Rwanda and Uganda, another destination country. They claim they have no rights in those countries, and quickly are forced to flee through war-torn countries like Sudan and Libya in hopes of making their way to Europe.

In a 2015 incident, a migrant who had left Israel was captured by Daesh terrorists in Libya and decapitated.

The migrants say they do not want to settle in Israel, but want to remain as refugees until it is safe for them to return to their homelands.

"Deportation kills," the crowd chanted. "We are not criminals. We are refugees," they said.

Thousands of migrants entered Israel from neighboring Egypt until Israel completed a massive border fence to stop the flow. Since then, Israel has struggled to find a solution for those who entered the country.

The deportation plan has sparked outrage in Israel, where critics have called it unethical and a stain on Israel's image as a refuge for Jewish migrants.

The government says it has no obligation to take in migrants, and that it has taken steps to make sure they are not harmed. Women, children and families, for example, are exempt from the deportation order.