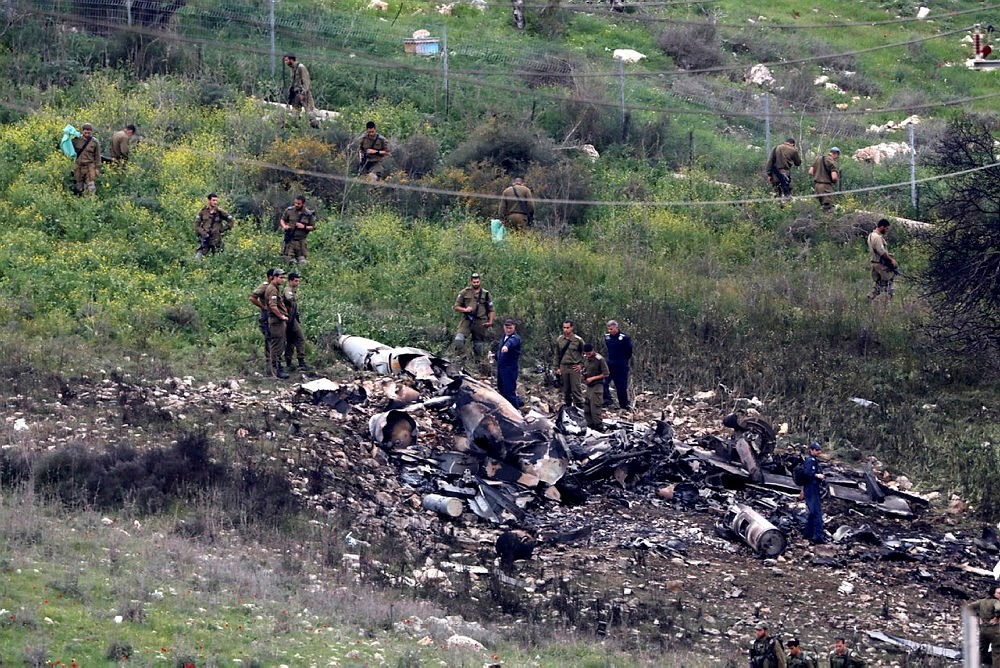 Israeli soldiers inspect the remains of an Israeli F-16 fighter jet that was shot down after a hit by Syrian anti-aircraft system, 10 February 2018. (EPA Photo)
by Compiled from Wire Services Feb 10, 2018 12:00 am

Prime Minister Benjamin Netanyahu vowed Saturday not to allow Iran to establish a military presence in Syria, after Israel launched air raids on what it said were Iranian targets in its neighbor.

"Israel wants peace but we will continue to defend ourselves with determination against any attack on us and against any attempt by Iran to entrench itself militarily in Syria or anywhere else," he said.

Earlier in the day, anti-aircraft fire downed an Israeli warplane returning from a bombing raid on Iran-backed positions in Syria in the most serious confrontations yet between Israel and Iranian-backed forces based across the border.

Netanyahu said he had spoken with Russian President Vladimir Putin. "I reiterated to him our obligation and right to defend ourselves against attacks from Syrian territory. We agreed coordination between our armies would continue," Netanyahu said in a televised statement.

The Kremlin said Putin had stressed the necessity to "avoid any measure that could lead to a dangerous escalation".

Netanyahu added that he had spoken with U.S. Secretary of State Rex Tillerson. "Israel seeks peace, but we will continue to defend ourselves steadfastly against any attack against us or any attempt by Iran to establish itself against us in Syria," Netanyahu said.

Israel fears Iran could use Syrian territory to stage attacks or create a land corridor from Iran to Lebanon that could allow it to transfer weapons more easily to Hezbollah — Lebanon's Iranian-backed political party and militant group sworn to Israel's destruction. Though Israel has largely stayed out of the Syrian conflict, it has struck weapons convoys destined for Hezbollah — which is fighting alongside Syrian forces — almost 100 times since 2012.

But Israel has refrained from striking Iranian sites directly. Syria has also repeatedly said it will respond to Israeli airstrikes but has rarely returned fire. Both of those trends came to an abrupt end Saturday as a rapid escalation played out in the early morning hours.