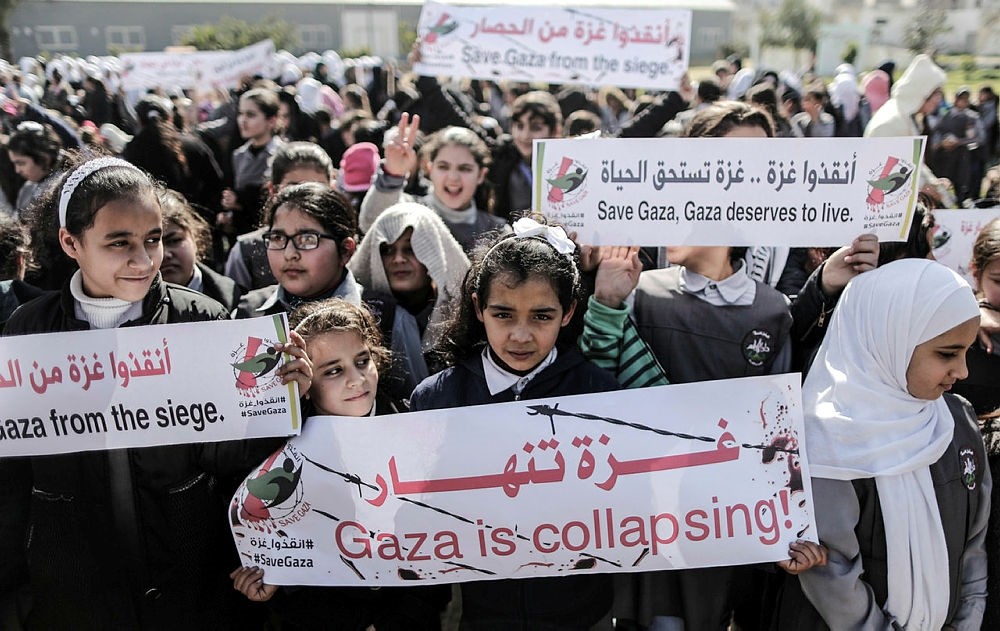 Palestinian schoolchildren shout slogans and hold placards during a protest in Gaza city on February 4, 2018, against the US decision to withhold funds earmarked for the UN relief agency for Palestinian refugees, UNRWA. (AFP PHOTO)
by Associated Press Feb 10, 2018 12:00 am

The U.N. agency for Palestinian refugees said Friday it has embarked on a fundraising campaign that will likely include a ministerial-level donors conference next month to fill the gap left by the Trump administration's sudden cut of tens of millions of dollars in funding.

Scott Anderson, the agency's West Bank operations director who just visited Washington, said the U.S. hasn't yet spelled out what reforms it wants to see implemented in order to restore the $65 million it is withholding now — and possibly millions more it may hold back in the future.

The U.N. Relief and Works Agency for Palestinian Refugees, known as UNRWA, was notified on Jan. 16 that the U.S. was withholding $65 million of a planned $125 million installment and demanding a "fundamental re-examination" of the agency in addition to changes to its programs, which have been heavily criticized by Israel.

UNRWA, which serves some 5 million Palestinian refugees and their descendants, had a budget of over $1 billion last year. The U.S. gave $350 million of that amount and was the agency's largest donor.

U.S. President Donald Trump told the World Economic Forum in Davos, Switzerland on Jan. 25 that the Palestinians must return to peace talks to receive U.S. aid money — a comment that raised alarm from the leaders of 21 international humanitarian groups who protested the administration's "dangerous" link between aid and political objectives.

Anderson, a former U.S. Army major, stressed that UNRWA has no political role and is a U.N. humanitarian organization that helps the impoverished civilians and youngsters needing education.

He responded to a questioner alleging that Palestinian students in UNRWA schools are taught that Israel doesn't exist and isn't on the map and that "Jews are hateful people" saying: "We certainly do not teach hatred for anyone and we do not teach that Israel does not exist."

Anderson added that he speaks to the Israeli army almost every day and a general tweeted last year "praising UNRWA for the work they're trying to do around the curriculum."

But Trump's action has sparked UNRWA's biggest-ever financial crisis, and it is seeking $800 million for emergency operations in Syria, the West Bank and Gaza Strip this year.

Anderson said "it's far too early to talk about the consequences of underfunding," stressing that "our operations remain viable."

But in the West Bank, he said Palestinians are quite concerned about the funding cuts as well as Trump's declaration of Jerusalem as the capital of Israel and continued Israeli settlement building.

"They see this also, without perhaps defining it as such, as an existential threat to them and their future," Anderson said. "It's a combination of fear of the decisions that have been taken, fear of what may be coming in the future, and trepidation of what all that means to them at this point in time."

But Anderson said he wants to focus less on consequences and more on increasing income.

In addition to the ministerial conference, he said UNRWA has launched a campaign for individual donors called "dignity is priceless."

Peter Mulrean, director of UNRWA's U.N. office, said only Kuwait has increased funding, giving the agency an additional $900,000. But he said 15 other countries have "front-loaded" their yearly donations including the United Arab Emirates, Qatar and Japan. Others have taken steps to do so including Switzerland, Finland, Denmark, Sweden, Norway, Germany, Russia, Belgium, the Netherlands and Ireland.

Mulrean said U.N. Secretary-General Antonio Guterres has agreed to participate in the ministerial conference which will also focus on UNRWA's accomplishments and cost-effective delivery of humanitarian assistance.

By showing "that we are effective and get a good bang for the buck," Mulrean said, "we hope (we) will make it all the more attractive for donor countries as well as others to step up and fund UNRWA."

Mulrean said UNRWA is also continuing to engage the United States and hopes it will participate in the funding conference.

"We would like nothing more than to see the U.S. continue as our single largest donor," he said. "They are a hugely important country in the region and they have traditionally been a great leader in humanitarian assistance and we hope that will continue to be the case."