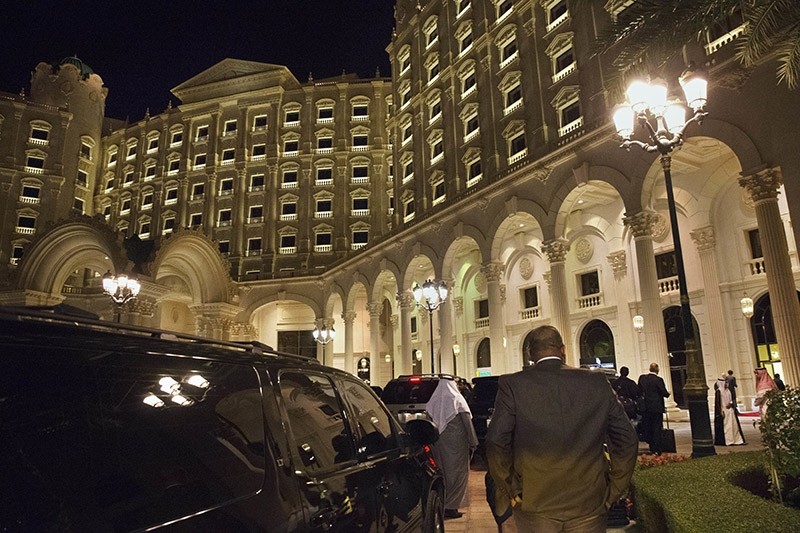 In this file photo, the motorcade carrying then U.S. Secretary of State John Kerry arrives at the Ritz Carlton Hotel in Riyadh, Saudi Arabia. (AP Photo)
by reuters Feb 11, 2018 12:00 am

Riyadh's Ritz-Carlton Hotel reopened on Sunday, more than three months after it was converted into a gilded prison for members of Saudi Arabia's business and political elite detained in an anti-corruption purge.

The gates of the luxury hotel, where U.S. President Donald Trump stayed during his state visit last year, had been shuttered and patrolled by black-uniformed royal guard units while dozens of princes, former ministers and business tycoons were interrogated inside.

The detainees were removed from the hotel two weeks ago, most released after cutting a deal with the authorities or being exonerated, an apparent sign that the corruption investigation, which sent shockwaves through the business community, was winding down.

A handful of smart-suited businessmen, forced to decamp to other hotels since November, returned to the Ritz on Sunday.

"It's an honour (to be back)," said one foreign consultant as he waited for a luxury car to take him to work.

"You forget about it as soon as you're in your room and you get lost in your own bubble."

Managers declined an interview request, but the company confirmed in a statement that the hotel had "resumed normal business operations as of today".

Among the most high-profile occupants during the anti-corruption campaign were global investor Prince Alwaleed bin Talal and Prince Miteb bin Abdullah, once seen as a leading contender for the throne.

Prince Miteb was freed after agreeing to pay over $1 billion, a Saudi official told Reuters.

Prince Alwaleed maintained his innocence of any corruption in a Reuters interview hours before his release. A senior Saudi official later said he was freed after reaching a financial settlement, without detailing the terms.

The attorney general has said the government had arranged to seize more than $106 billion through such agreements, an assertion Reuters has been unable to verify.

Critics decried the campaign as a shakedown and power play by 32-year-old Crown Prince Mohammed bin Salman, who is aiming to overhaul the way the deeply conservative kingdom is run and wean it off dependence on oil revenues.

Ten days before the purge began, the Ritz hosted an international business conference where Prince Mohammed spoke onstage and snapped selfies with admirers. Some participants later ended up as detainees.

In the absence of more information, speculation ran wild about what was happening inside the Ritz. The authorities denied rumors of torture and attempted suicides.

The attorney general has said 56 people remain in custody. They are believed to have been moved to prison after refusing to admit wrongdoing and may end up in court.

Ahmed al-Safer, a Yemeni-American businessman who regularly stays at the Ritz, stopped in on Sunday to have tea with friends.

Asked if the purge had affected the hotel's reputation, he said: "Right now it's famous. Everyone will visit just to take a picture."