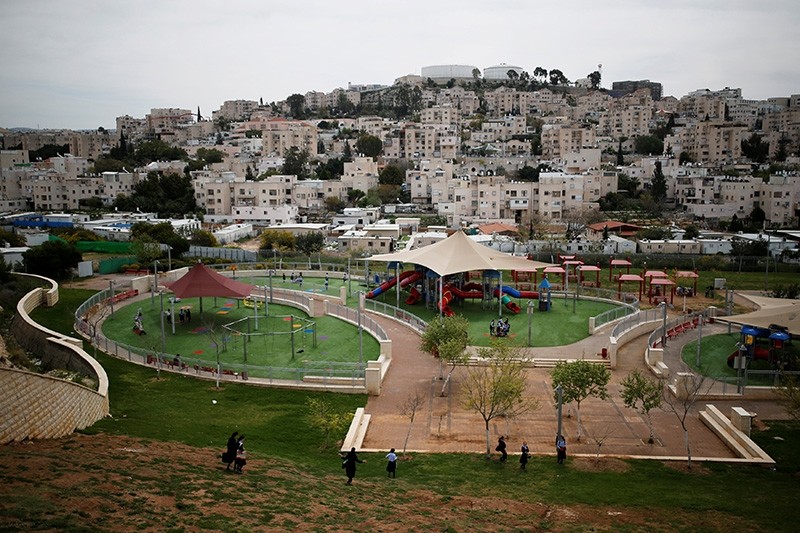 Israeli Prime Minister Benjamin Netanyahu said Monday he has been discussing legislation with the United States that would effectively annex settlements in the occupied West Bank, a spokesman said.

The move would severely harm remaining prospects for a two-state solution to the Israeli-Palestinian conflict and draw international outrage.

"Regarding the issue of applying sovereignty, I can tell you that I have for some time been speaking with the Americans about it," Netanyahu told lawmakers from his Likud party, according to comments relayed by a spokesman.

Netanyahu said he wanted to coordinate any such move with the United States because of the country's strategic importance to Israel.

The comments come as Netanyahu is under pressure from right-wing politicians to move ahead with legislation that would apply Israeli sovereignty to settlements in the West Bank.

Two lawmakers, including one from Netanyahu's party, have such proposed legislation.

Netanyahu blocked it from being advanced on Sunday, with officials citing the need to focus on security issues following a confrontation that led to Israeli air strikes in Syria at the weekend.

Unilateral annexation of settlements would be sure to draw international outrage, though Netanyahu's government has been bolstered by the unstinting support of U.S. President Donald Trump.

Trump recognized Jerusalem as Israel's capital in December in a move praised by Netanyahu as "historic," but denounced by the Palestinians and most of the rest of the world.

While Israel would expect to retain certain settlements in any two-state peace deal, longstanding international consensus has been that their status must be negotiated.

The same consensus has been in place for decades regarding the status of Jerusalem, with the Palestinians wanting the eastern sector of the city as the capital of their future state.

Israeli settlements are located in what is known as Area C of the West Bank, which accounts for more than 60 percent of the Palestinian territory.

Annexing all settlements would leave little space for a Palestinian state.

Netanyahu heads what is seen as the most right-wing government in Israeli history, and prominent ministers openly oppose a Palestinian state.

Those who oppose a Palestinian state advocate for Israel to annex most of the West Bank, citing Jews' historical ties to the land from the biblical era.

Netanyahu says he wants the Palestinians to govern themselves, but in recent months has declined to specify whether that would mean an independent Palestinian state or some lesser form of autonomy.

He has stressed recently that Israel must retain security control in the Palestinian territories under any peace arrangement.

"Whether or not it's defined as a state when we have the military control is another matter, but I'd rather not discuss labels, but substance," he said when meeting German Foreign Minister Sigmar Gabriel on January 31.

Gabriel said there was "growing frustration" in Europe with Israel's actions.

While Trump has offered strong support of Israel, he said in an interview published Sunday that he was "not necessarily sure" the country was seeking to reach a peace agreement with the Palestinians.

"And I am not necessarily sure that Israel is looking to make peace. So we are just going to have to see what happens."

Trump also expressed concerns about Israeli settlement building, although his administration has been far less critical of settlements than his predecessor Barack Obama.

Trump's ambassador to Israel, David Friedman, has in the past been a supporter of Israeli settlements in the West Bank.

"The settlements are something that very much complicates and always have complicated making peace, so I think Israel has to be very careful with the settlements," Trump said.