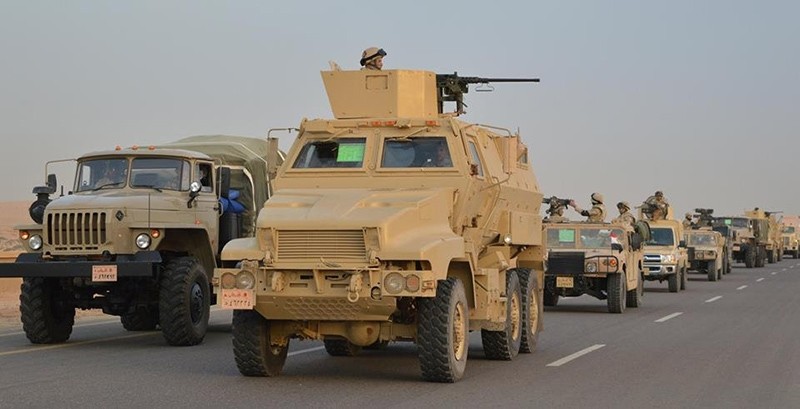 In this undated handout photo made available Feb. 9, 2018, Egyptian Army's Armored Vehicles are seen on a highway to North Sinai during a launch of a major assault against militants in Ismailia, Egypt. (Egypt's Ministry of Defense via Reuters)
by Feb 13, 2018 12:00 am

Egyptian security forces killed 10 militants in an exchange of fire and arrested 400 suspects, including foreigners, in a continuing crackdown in Sinai, the army said in a statement carried by state TV on Tuesday.

Based on army statements, around 38 militants have been killed since the latest offensive to crush insurgents blamed for a string of attacks began.

Egypt launched a major security operation on Friday involving the army and police against "terrorist and criminal elements and organizations" across the country, according to the army spokesman.

President Abdel Fattah el-Sissi, who is seeking re-election in March, ordered the armed forces in November to defeat militants within three months after an attack on a mosque killed more than 300 people, the deadliest such violence in the Arab world's most populous country.

The insurgency poses the greatest challenge to the government in a country that is both the most populous in the Arab World and a main regional ally of the United States.