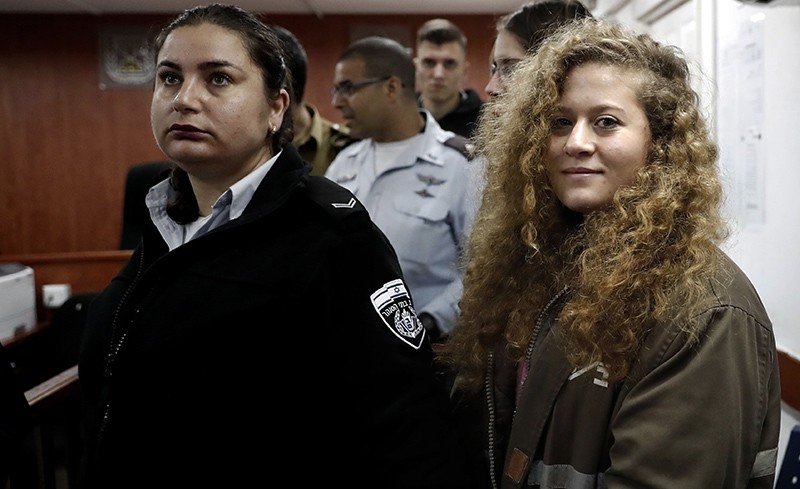 17-year-old Palestinian Ahed Tamimi, right, stands for the beginning of her trial in the Israeli military court at Ofer military prison in the West Bank village of Betunia, Feb. 13, 2018. (AFP Photo)
by Compiled from Wire Services Feb 13, 2018 12:00 am

The trial of Ahed Tamimi, a symbol of Palestinian resistance and one of an estimated 300 Palestinian minors in Israeli jails, opened behind closed doors, will likely take months

The closely watched trial of a Palestinian girl for slapping and punching two Israeli soldiers opened before an Israeli military court in the West Bank on Tuesday, but the judge ordered all proceedings to be held behind closed doors in a case that has drawn wide criticism of Israel for prosecuting the teenager.

A large crowd of local and international journalists had shown up to cover the trial of 17-year-old Ahed Tamimi, who has become something of an icon for Palestinians and supporters of their cause worldwide.

Tamimi, dressed in a prison jacket with her hands and feet shackled, smiling slightly, appeared fresh and confident as she entered the packed courtroom. She briefly whispered to relatives in the back of the room before the judge ordered everyone except her family out.

Ahed Tamimi has been incarcerated since she was arrested on Dec. 19, four days after she was filmed confronting the soldiers outside her West Bank home.

Israel has treated her actions as a criminal offense, indicting her on charges of assault and incitement that could potentially lead to years in prison.

But Ahed Tamimi's supporters see a brave girl who struck two armed soldiers outside her West Bank home in frustration after having just learned that Israeli troops seriously wounded a 15-year-old cousin, shooting him in the head from close range with a rubber bullet during nearby stone-throwing clashes.

The teen with the large curly mane of blond hair, who turned 17 in jail last month, has become the latest symbol of the long-running battle between Palestinians and Israelis over global public opinion.

Israel's full-throttle prosecution of Tamimi, one of an estimated 300 Palestinian minors in Israeli jails, and a senior Israeli official's recent revelation that he once had parliament investigate whether the blond, blue-eyed Tamimis are a "real" Palestinian family have helped stoke ongoing interest in the case.

International human rights groups have criticized the aggressive prosecution, and diplomats from the European Union and several European countries, including Germany and the Netherlands, attended Tuesday's hearing as observers before they were kicked out along with journalists.

The clashes occurred in Nabi Saleh, the West Bank town where some 600 members of Tamimi's extended family live. Since 2009, residents there have staged regular anti-occupation protests that often ended with stone-throwing clashes.

Ahed Tamimi has participated in such marches from a young age, and has had several highly publicized run-ins with soldiers. One photo shows the then 12-year-old raising a clenched fist toward a soldier towering over her.

In his decision, the judge, Lt. Col. Menachem Lieberman, said the trial would remain closed for Tamimi's own protection. "I didn't think it's good for the minor that there are 100 people in the courtroom," he said.

"The way to keep it out of everybody's eyes is to close doors and not allow people inside the court for the hearing."

She said her strategy would be to argue that Israel's continued occupation over the West Bank, captured in the 1967 Mideast war, is illegal and that the indictment is aimed at deterring Ahed and other Palestinian youths "from resisting occupation nonviolently."

Earlier in the day, Tamimi's father told The Associated Press as he headed into the court that he came "with no good expectations, because this a military court, and it's part of the Israeli military occupation."