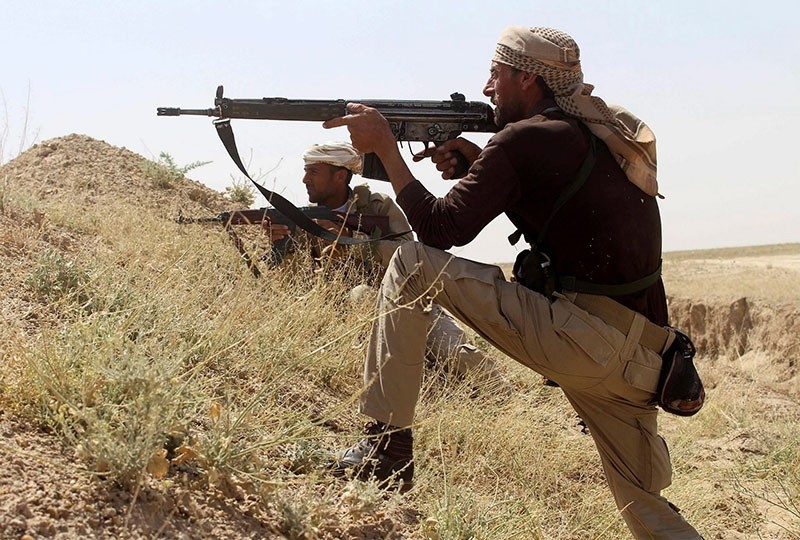 An Iraqi soldier fights against Daesh terrorists on the outskirts of Ramadi. (Sabah File Photo)
by Compiled from Wire Services Feb 19, 2018 12:00 am

Terrorists disguised in Iraqi military uniforms killed 27 members of a Shiite-dominated pro-government militia in an ambush north of Baghdad claimed by the Daesh terror group.

Clashes erupted late Sunday between the al-Hashd al-Shaabi militia (Popular Mobilization Forces, or PMF) and the militants, who were wearing Iraqi army fatigues while manning a fake checkpoint. PMF was incorporated into the Iraqi armed forces in 2016.

The attack took place during a PMF operation to arrest terrorists and sleeper cells in the Hawija area in western Kirkuk city and surrounding areas, according to a statement from the militia.

Daesh claimed responsibility for the attack in a statement published by its mouthpiece, Amaq, saying 30 people were killed in the ambush.

Local police sources also reported that Daesh had executed 20 of the PMF fighters captured in the ambush.

"Daesh killed all the al-Hashd al-Shaabi fighters who had been captured earlier following clashes," Afrasyav Qamil, a spokesman for the Kirkuk Police Directorate, told Anadolu Agency.

According to Qamil, the bodies of 20 slain PMF fighters were found by Iraqi security forces who arrived in the area in the wake of the clashes.

Noting that the fighters had been "brutally" killed, Qamil pointed out that the terrorist group had also managed to capture several military vehicles and large amounts of ammunition.

Iraq declared victory over Daesh in December, having retaken all the territory captured by the militants in 2014 and 2015.

Nevertheless, it appears that the group still maintains "sleeper cells" in several parts of the country, including the oil-rich Kirkuk province. Earlier this month, Iraq announced the start of an operation in the western province of Anbar targeting Daesh.