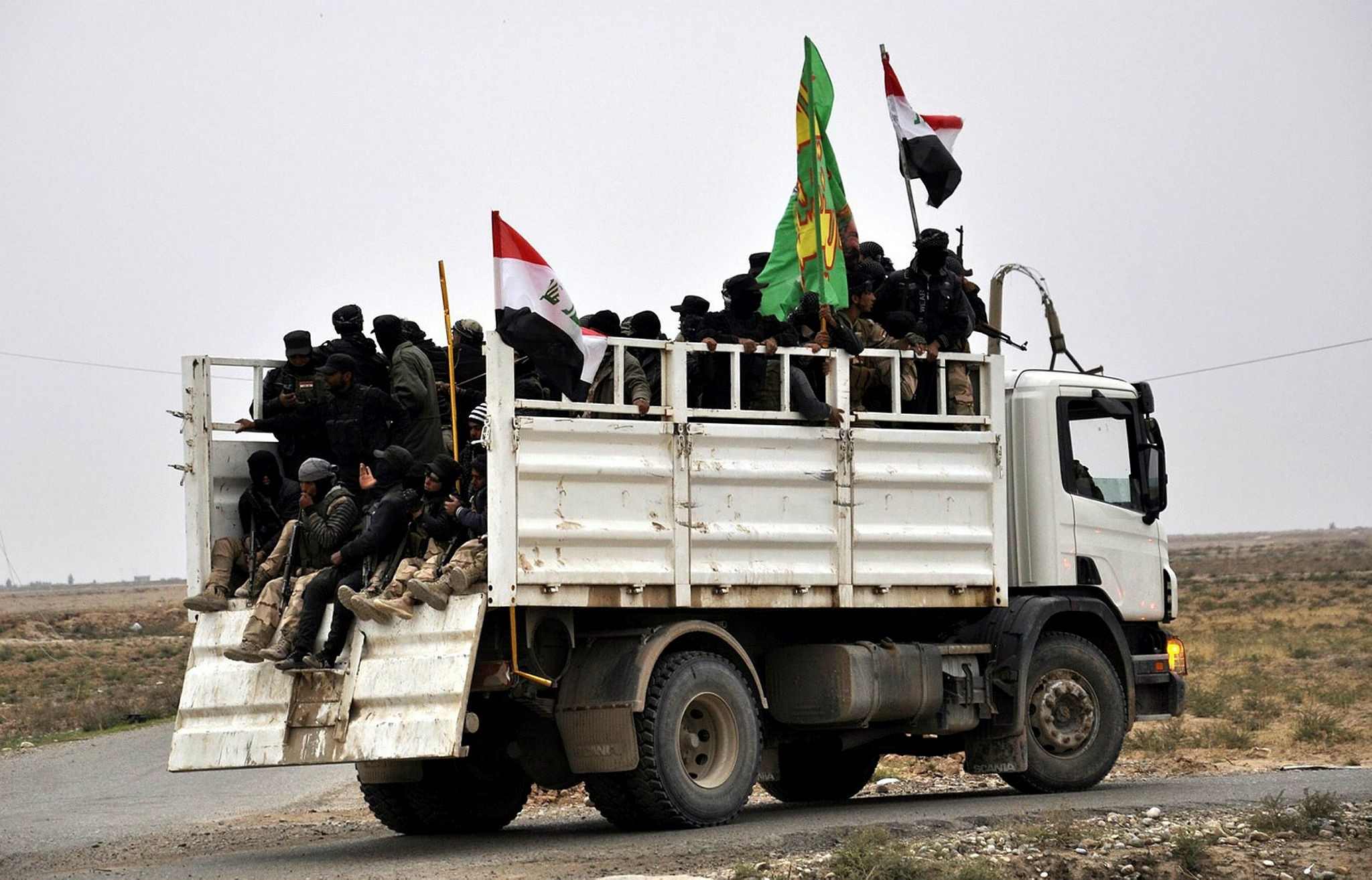 Fighters of Iraqi Shiite militias who volunteered to support the Iraqi forces ride a truck as they make their way towards Daquq town near Tikrit city, northern Iraq, 08 February 2015. (EPA Photo)
by Daily Sabah with AA Feb 20, 2018 12:00 am

Iran's expansionist policies in the Middle East have resulted in bloodshed and sectarian divergence, however, the country's continuous efforts to create a network of proxies in the region seem to have exacerbated tensions in two crisis-ridden states, Syria and Iraq.

In addition to numerous Iran-backed Shiite militia groups in Syria that are fighting for the Assad regime, the Hashd Shaabi or Popular Mobilization Forces, and other militia groups are also harming the stability and peace in Iraq as well.

For example, five Christian protesters were injured by Shia militia gunfire in northern Iraq in December.

As scores of Christians were demonstrating in the town of Bartala to protest assaults by members of the Hashd al-Shaabi militia against their minority, militiamen opened fire in an attempt to disperse the protesters, who chanted slogans against them, leaving three men and two women injured by the gunfire.

"Many Christians are angry with practices of the Hashd al-Shaabi militia and consider them a continuation of violations committed by the Daesh terrorist group," Capt. Agathon Saleh told Anadolu Agency.

The expansionist admirations of Iran are not limited to Iraq and Syria, as Shiite Houthi militia continue to carry out attacks against Yemeni government forces and civilians.

Last week, Iran-backed Houthis kidnaped 300 civilians, mostly elderly and children, within a week in the town of Adeen, local sources said, as reported by al-Arabiya on Wednesday.

The kidnappings came after the killing of Houthis commander Abu Abdulrahman Al-Alwi in the district last Friday.

Yemen fell into civil war in 2014 because of Houthis, as the militia overran the capital Sanaa and other parts of Yemen, forcing members of the country's internationally recognized government to temporarily flee to Saudi Arabia.

However, Syrian people took the hardest hit by Iran's destabilization efforts in the region as the Iranian-backed terror groups and militia continue aiding and abetting Syrian regime in attacks against civilians and moderate opposition groups.

Around 18,000 Shiite militiamen are believed to be fighting alongside the Bashar Assad regime in Syria, which has been ravaged by a vicious civil war since 2011, local sources told Anadolu Agency.

Hezbollah, another Iran-backed terrorist group operating mainly in Lebanon, also sent many fighters to fight for the regime.

According to estimates, at least 10,000 Hezbollah fighters are believed to be fighting alongside the Assad forces across Syria.

These militias, which are drawn from Iraq's predominantly Shiite areas such as Baghdad, Najaf, and Basra, are estimated to number nearly 5,000.

There are also other militias as Pakistani Zaynabiyyun Brigades, which has more than 500 members and are fighting in the north of Aleppo, and the Afghan Fatimiyun Brigade, which has about 2,000 fighters in the south of Aleppo, Damascus and Daraa.

The Assad regime is using local militia groups supported by Iran known as "shabiha" to bolster its forces against the moderate opposition.

The shabiha, which is blamed for the killing of many anti-Assad protesters, is estimated to be composed of 24,000 members.

In the first year of the conflict, the shabiha militiamen began to replace soldiers deserting the army. Their numbers began to increase significantly as the regime forces lost power.

The group is believed to be funded by pro-regime tribal leaders and businessmen, including Assad's cousin Rami Makhlouf.