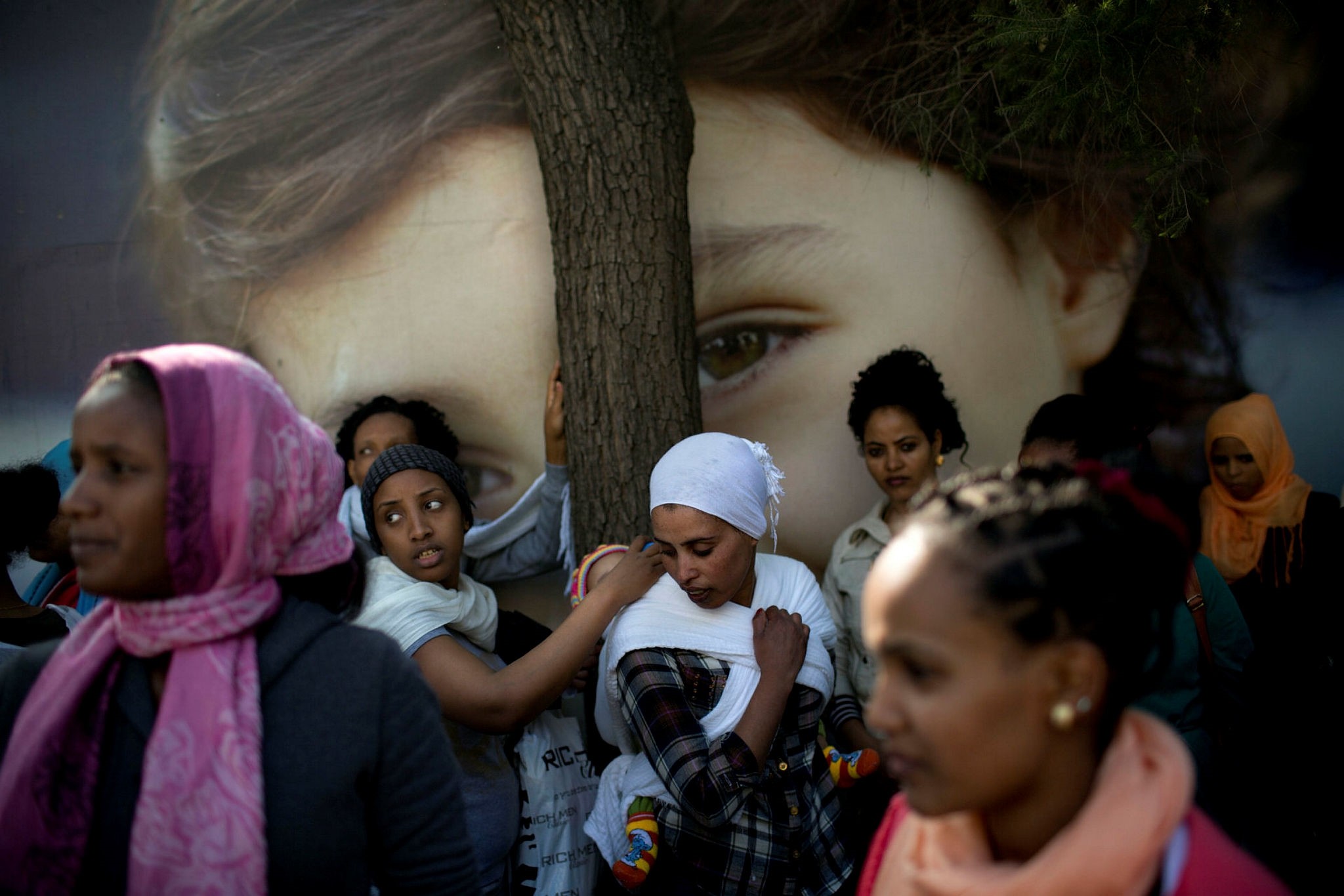 In this Jan. 15, 2014, file photo, African female and child migrants protest in front of the UNHCR office demanding asylum and work rights from the Israeli government in Tel Aviv, Israel. (AP Photo)
by Compiled from Wire Services Feb 22, 2018 12:00 am

Israel has implemented a controversial policy to expel or indefinitely imprison African migrants, a spokesman for the group said Wednesday.

Israel has resolved to expel thousands of Eritreans and Sudanese who entered illegally over the years, giving them an ultimatum to leave or risk being imprisoned indefinitely.

As the migrants could face danger or imprisonment if returned to their homelands, Israel is offering to relocate them to an unnamed third country, which the migrants and aid workers say is Rwanda or Uganda.

Authorities on Tuesday transferred seven Africans from the Holot detention center to a nearby prison, prompting the 750 men held in Holot to launch a hunger strike that evening, said Abdat Ishmael, an Eritrean held at the southern Israel open facility. On Wednesday, another five were taken to prison, Ishmael told AFP.

A spokeswoman for the Israeli interior ministry confirmed they had begun implementing the deportation or prison policy on Holot detainees ahead of the April 1 mark for the rest of the Africans who had entered Israeli illegally.

Ishmael said they would prefer prison to deportation to Africa. "We saw what happened to people who went [to other African countries] a year or two ago, they don't receive asylum and can die," he said.

Israel's deportation or imprisonment plan has drawn criticism from the United Nations' refugee agency as well as some in Israel. According to interior ministry figures, there are currently some 42,000 African migrants in Israel, half of them children, women or men with families, who are not facing the April deportation deadline. Israeli officials stress that no one they classify as a refugee or asylum seeker will be deported.

Africans began heading to Israel in 2005 after neighboring Egypt violently quashed a demonstration by Sudanese refugees in which at least 27 were killed, and word began to spread of safety and job opportunities in Israel. Since then, Israel has been grappling with how to balance the country's history as a refuge for Jews fleeing persecution against the fear that the swelling numbers would threaten its Jewish character.

About 60,000 migrants crossed Israel's previously porous desert border with Egypt before a barrier was completed in 2012 along the 130-mile (220-kilometer) frontier.

Since then about 20,000 have left either voluntarily, via a United Nations program or with the encouragement of the government, which offers each about $3,500 and a plane ticket to leave. Others have found themselves locked up for lengthy periods in a massive detention center in the remote southern desert, keeping them away from their menial jobs in hotels and restaurants.

Still, thousands of migrants are concentrated in neighborhoods in south Tel Aviv, where ethnic food shops and phone card stalls line the streets, and the area has become known as "Little Africa." This has sparked tension with working-class Jewish residents who have been putting pressure on the government to find a solution.