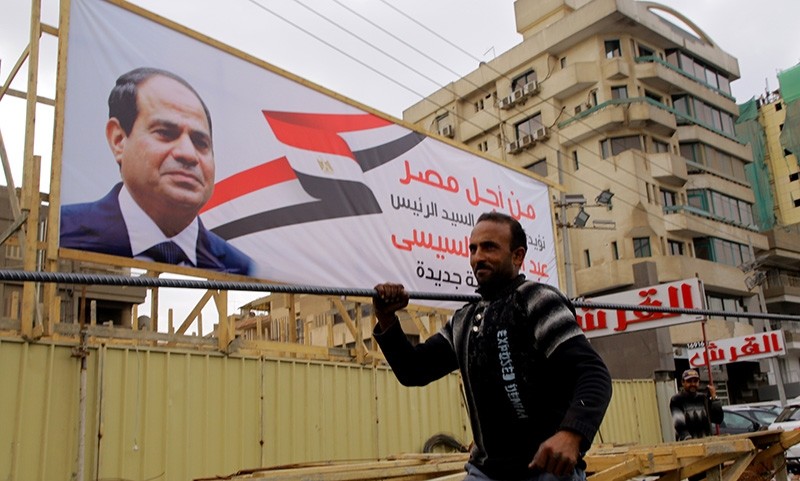 Egyptians laborers work at an under construction site near an election campaign poster erected by supporters of Egyptian President Abdel-Fattah el-Sissi, in Cairo, Egypt, Feb. 21, 2018. (EPA Photo)
by Daily Sabah with Wires
Feb 25, 2018 12:00 am

As campaigning opens in Egypt's presidential elections, a two-candidate vote that's virtually certain to be won by the incumbent, President Abdel-Fattah el-Sissi continues the crackdown on dissenting voices.

Sissi is challenged by an obscure politician who entered the race in the eleventh hour to save the president and his government the embarrassment of a one-candidate election. A string of potentially serious challengers has been arrested or intimidated out of the race.

Over the weekend, hundreds of billboard advertisements in support of the incumbent have been mounted alongside existing ones on the streets of Cairo, almost all bearing the image of a smiling Sissi, with slogans focusing on the economy and security.

Campaign banners for the challenger, Moussa Mustafa Moussa, who is an ardent Sissi supporter, are conspicuously absent.

The government announced Sunday it had frozen the assets of leading government critic Abdel Moneim Abul Fotouh, arrested earlier this month over alleged links to exiled members of the outlawed Muslim Brotherhood, the prosecution said Sunday.

His Feb. 14 arrest came after he joined a call for a boycott of next month's presidential election.

Abul Fotouh was detained shortly after arriving from London, where he gave interviews in which he was critical of the Egyptian government.

He was remanded in custody for 15 days and placed on the Egyptian blacklist of "terrorists."

On Sunday, the public prosecutor's office said it had decided to "sequester the assets of the Muslim Brotherhood leader [Abul Fotouh] and other people who have been placed on terrorist lists."

It said an ongoing judicial probe had shown Abul Fotouh's funds were being "used to carry out terrorist activities."

The interior ministry said following his arrest that Abul Fotouh, a former leading member of the Muslim Brotherhood and candidate in the 2012 presidential election, had contacts with the group's members in exile "to sow trouble and instability."