Egypt arrests mother who accused police of torturing her daughter 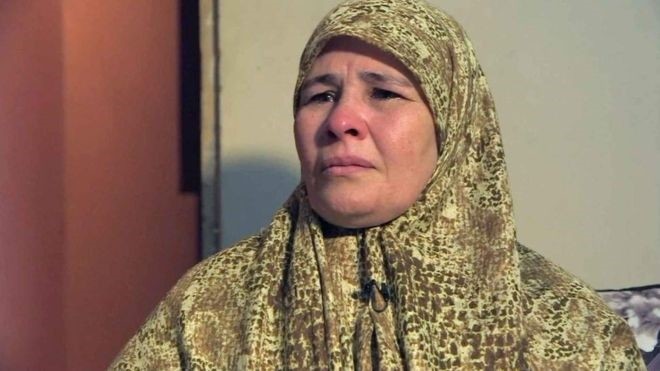 A mother who angered Egyptian authorities by accusing the police in a foreign news report of torturing her daughter has been arrested and was ordered detained on Friday, while the human rights lawyer who first publicly mentioned the mother's detention has gone missing.

The public prosecutor ordered the detention of Mona Mahmoud Mohammed, known as Oum Zubeida, for 15 days pending investigations into her statements made in the BBC report. The report, which went online and was televised a week ago, addressed torture and forced disappearances under President Abdel-Fattah el-Sissi.

The moves are the latest episode in Egypt's ongoing assault on free speech and the media, which most recently has focused on foreign journalists and those who work with them, both of whom are regularly denounced in state and private media.

The state-run news agency MENA reported that Mohammed is facing an array of charges, including spreading false news with the intent to harm the national interest, as well as belonging to the banned Muslim Brotherhood, which Egypt has designated as a terrorist organization.

Meanwhile, lawyer Ezzat Ghoneim of the Egyptian Coordination for Rights and Freedoms, who was the first to report Mohammed's Wednesday arrest and had criticized authorities' handling of her daughter publicly, went missing on his way home Thursday evening.

"No one has seen or heard from him since," said Ahmed el-Attar of the group, which has started an online campaign seeking information about him but assumes he has been arrested. Ghoneim has long supported victims of alleged police torture, the disappeared, and their families in Egypt.

"It's a shame since all he's been doing is helping Egyptians understand their legal rights," said el-Attar, whose group had followed the case of Mohammed's daughter, Zubeida, and helped her mother file a complaint to police when she went missing.

At the crux of the matter is the BBC report, which included interviews with activists and other individuals describing police abuses. It has dominated Egyptian media in recent days, with pro-government commentators slamming it as attempt to defame the country, in what has become par for the course for news critical of authorities.

In the report, entitled The Shadow Over Egypt, Mohammed claimed authorities had tortured and raped her daughter in detention, then released her but captured her again a year ago and have held her incommunicado since.

After the documentary aired however, the daughter swiftly appeared on pro-government media, saying she was free and had been out of touch for unexplained personal reasons. The mother then told foreign-based opposition media that she thought the daughter spoke under duress.

The BBC in its report said it gave Egyptian authorities ample time to respond to the allegations it was making but was met with a wall of silence. Egyptian authorities rarely comment when contacted by journalists, although their official position is that torture is not systematic.

Rights groups and doctors who follow up on such cases, however, say otherwise.

Ghoneim had posted online his suspicions over the interview with the daughter, saying that it seemed implausible that although Mohammed with the help of rights lawyers could not find her for months, she suddenly emerged when it became convenient to support an official narrative of police innocence.

Authorities have since called for a boycott of the BBC, while the country's chief prosecutor has ordered his staff to move against media outlets "hurting national interests" and el-Sissi himself has called any defamation of the country's security forces "high treason."

The prosecutor, Nabil Sadeq has even gone so far as to cite "forces of evil" — one of el-Sissi's hallmark phrases — in his statement on the media, saying that they have been trying to "undermine the security and safety of the nation through the broadcast and publication of lies and false news."

Thousands of people have been jailed since el-Sissi's rise to power in 2013, when the army under his command overthrew his elected but divisive Islamist predecessor. Some groups estimate up to 60,000 political prisoners are in jail.

Egypt's media is dominated by pro-government outlets that demonize dissent, while critical voices have been silenced and some 500 independent websites have been blocked by authorities since last year. An estimated 20 journalists are currently imprisoned.

Late last month, international rights groups urged the government to provide information about three additional Egyptian journalists they said had been forcibly disappeared: Moataz Wadnan, who was stopped in a Cairo suburb on Feb. 16, and Moustafa el-Asar and Hassan el-Banna, who were brought before state security prosecutors two weeks after they went missing on Feb. 4 on their way to work in Cairo. All three have reappeared in custody.

The repression has reached a fever pitch in recent weeks ahead of an election later this month in which el-Sissi faces only a little-known supporter of his as an opponent. All others who have attempted to run against him have been arrested or intimidated out of the race.