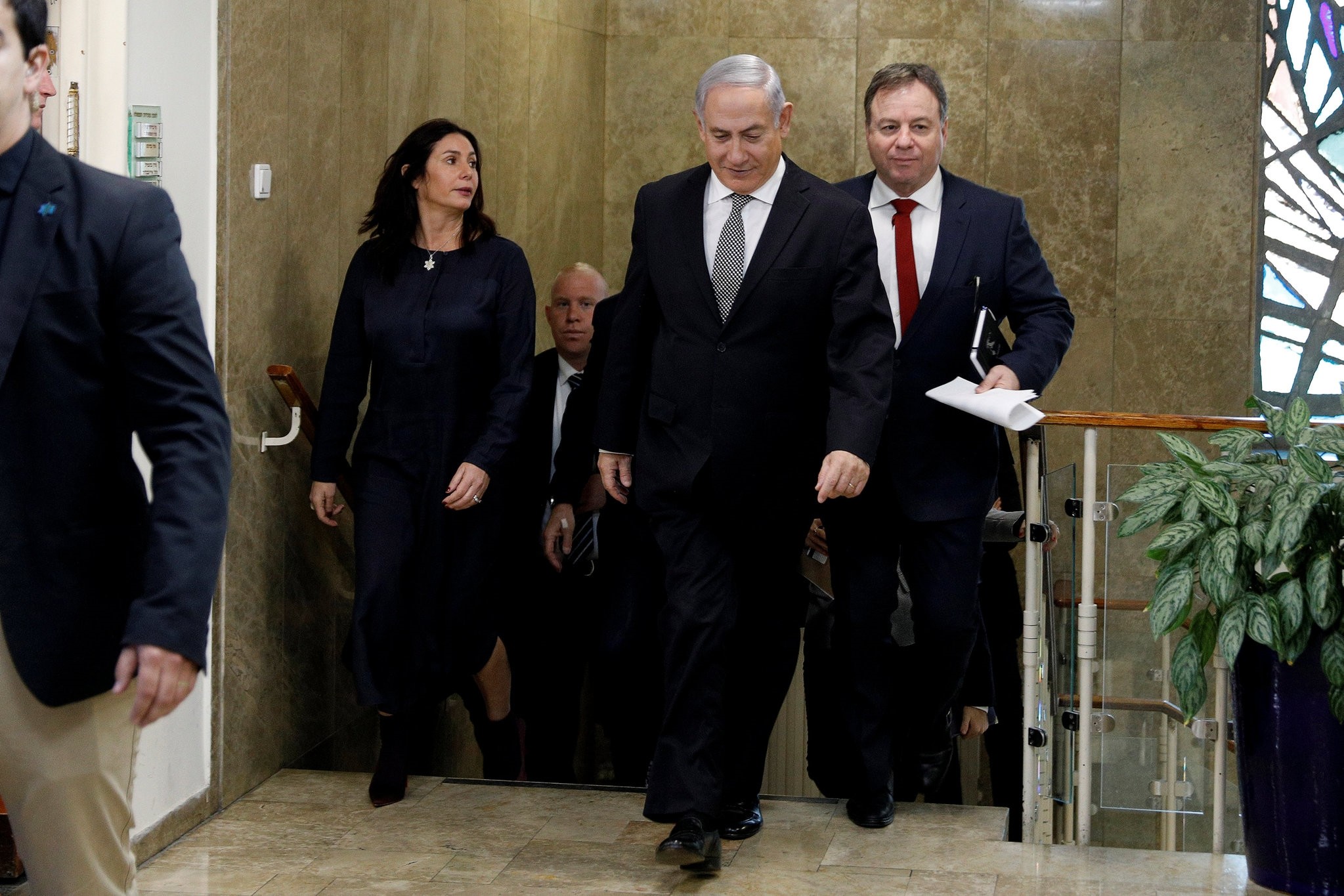 Israeli Prime Minister Benjamin Netanyahu arrives ahead of the weekly cabinet meeting at the Prime Minister's office in Jerusalem, February 25, 2018. (REUTERS Photo)
by Mar 06, 2018 12:00 am

An ex-aide to Israeli Prime Minister Benjamin Netanyahu has signed a state witness deal in a corruption probe linked to his former boss, Israeli media reported Monday, dealing a new setback to the premier.

News of the agreement broke ahead of Netanyahu's meeting with US President Donald Trump at the White House later Monday.

The widely reported agreement between Israeli authorities and Nir Hefetz, a former spokesman for the Netanyahu family, comes as corruption investigations into the prime minister intensify.

Israeli police provided no details on the reported agreement. Hefetz would be the third Netanyahu associate to sign a state witness deal in recent months.

State-run Israeli TV channel Kan 11 on Monday night cited sources close to Hefetz as saying he told them he agreed to testify out of concern for his country's security.

Hefetz told his confidants Netanyahu "took decisions on security matters under the significant influence of members of his family and others close to him, primarily his son Yair," the TV said.

A statement from a Netanyahu spokesman dismissed the report, which said that Hefetz would give evidence of corruption against Netanyahu and his wife Sara.

"The comments attributed to Nir Hefetz regarding Sara and Yair are nonsense," it said.

"For more than seven years Nir Hefetz has not been privy to any intelligence, political or security information whatever."

"Therefore, the comments attributed to him are baseless," the Hebrew language statement said.

On Sunday, an Israeli court released Hefetz and telecoms mogul Shaul Elovitch and put them under house arrest after 14 days in custody.

Hefetz is alleged to have acted as a messenger between Netanyahu, Elovitch's telecoms group Bezeq and news website Walla!, media reports say.

Police suspect Bezeq was given regulatory breaks in return for Netanyahu receiving positive coverage on Walla!, a news website owned by the telecoms group.

Hefetz is also suspected of trying to bribe a retired judge to block a probe into the prime minister's wife, Sara Netanyahu, over alleged misuse of public funds, according to the reports.

Israeli newspaper Haaretz reported that Hefetz had agreed to hand over recordings of Netanyahu and his wife as part of the state witness deal.

Last month, Israeli police recommended Netanyahu's indictment on two other cases of alleged bribery. The attorney general is now considering how to move forward in those cases.

In one case, Netanyahu and family members are suspected of receiving one million shekels ($285,000, 230,000 euros) in gifts, including luxury cigars, champagne and jewellery, from wealthy figures in exchange for financial or personal favours.

In the other case, investigators suspect the premier of trying to reach an agreement with the owner of Yediot Aharonot newspaper for more favourable coverage.

Israeli media reported that Hefetz could also provide testimony in those two investigations.

The investigations into Netanyahu's affairs have raised questions over whether the 68-year-old will eventually have to step down.

He has been prime minister for a total of around 12 years.

The probes have also led to speculation in the Israeli media that he may opt for early elections in the coming months in a bid to bolster his standing before a decision on indictments is made.

Polls have suggested Netanyahu could remain prime minister in fresh elections despite the corruption investigations hanging over him.

He is also set to reap further political benefits in May when the United States relocates its embassy in Israel from Tel Aviv to the disputed city of Jerusalem, a move popular among Israelis even though it has been denounced across the world.

Before boarding the plane for the United States on Saturday night, Netanyahu said he did not want to call early elections and hoped his right-wing coalition would survive its entire mandate, which expires in November 2019.

However, politicians across the board sense elections may be on the horizon and have hardened their approach.

A dispute that has arisen within the coalition in recent days could prove to be its undoing.

Ultra-Orthodox Jewish parties want a law passed to allow religious students to continue to be exempted from military conscription.

Other members of the coalition oppose such a law, but the ultra-Orthodox have threatened to block a 2019 budget that Finance Minister Moshe Kahlon wants to see approved this month.