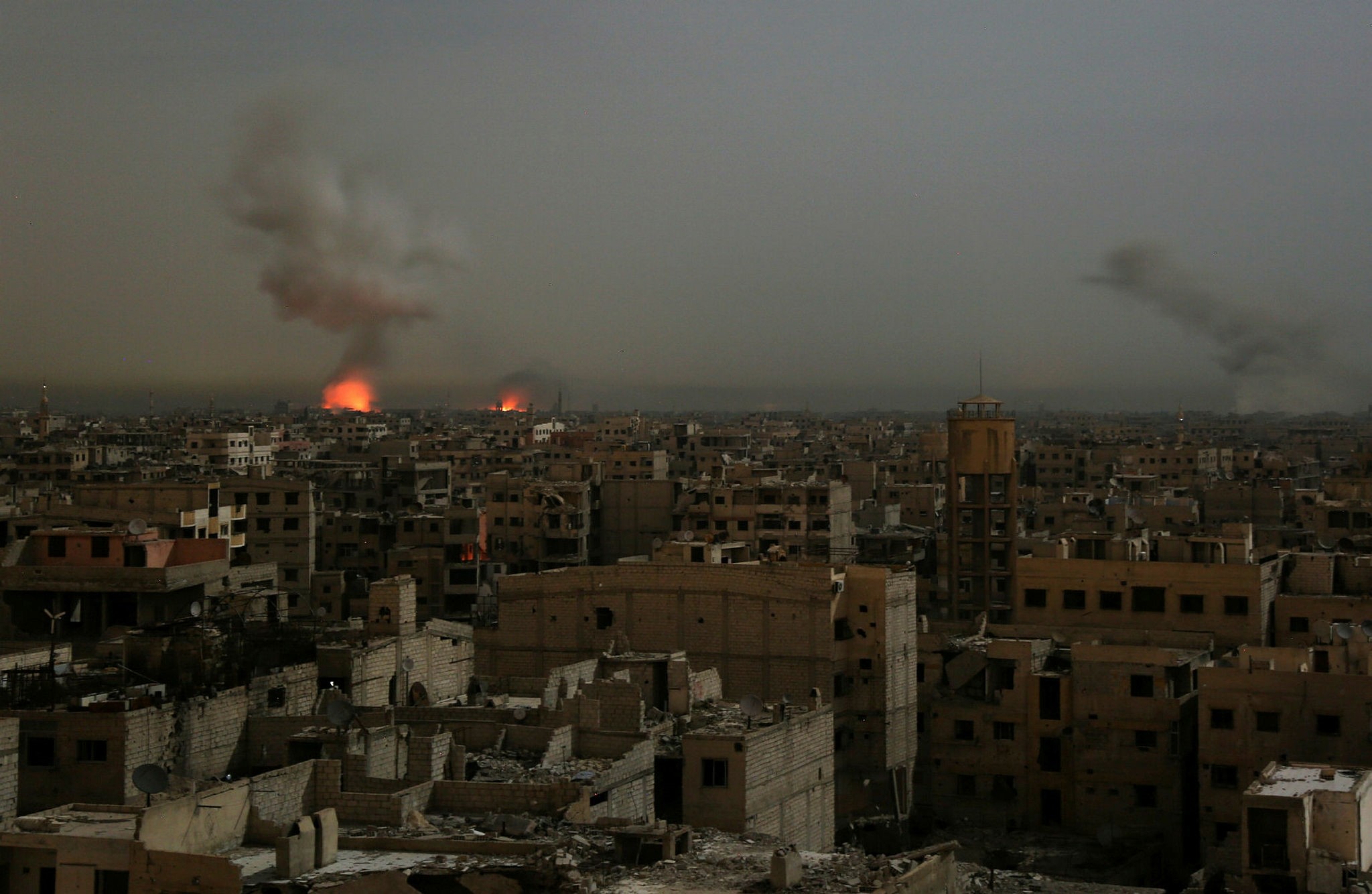 Smoke and flames rise from buildings following reported Syrian regime airstrikes on the opposition-held town of Saqba in the besieged Damascus suburb of Eastern Ghouta, March 4.
by Yusuf Selman İnanç Mar 06, 2018 12:00 am

Regime forces and Iranian proxies, particularly Lebanese-based Shiite militant group Hezbollah, are making advances deeper into Eastern Ghouta with a major ground assault launched a few days ago following aerial attacks, which have destroyed large parts of the city. Some 400,000 people are trapped in the densely populated Damascus suburb with no opportunity to evacuate to safety. The latest reports say that civilians were escaping with no security amid intense shelling.

The regime has also been blocking aid deliveries. Although some are allowed through, they are stripped of medical equipment. The World Health Organization (WHO) accused the regime of confiscating medical materials while the killing and wounding of civilians continue and many are in need of immediate medical help. Reuters on Monday quoted a WHO official who said that regime officials removed trauma kits and surgical supplies from trucks in an aid convoy.

"All trauma [kits], surgical, dialysis sessions and insulin were rejected by security. Some 70 percent of the supplies loaded on its trucks leaving its warehouses had been removed during the inspection," the WHO official said. Douma is experiencing a similar situation. "This morning the U.N. and partners were informed that many of the planned health supplies intended for Douma were not allowed to be loaded and not permitted to be replaced with other life-saving items. The items included trauma kits and other lifesaving supplies. Consequently, three of the 46 trucks being sent to Douma today are close to empty," the U.N. Office for the Coordination of Humanitarian Affairs said.

The humanitarian situation has deteriorated as water and food are in short supply, as well. Syrian state television proudly broadcasted the captured villages that had been completely destroyed. Footage showed collapsed concrete buildings, rubble-strewn streets and bullet-pocked walls. However, Bashar Assad said the statements on the humanitarian situation were "ridiculous lies." The U.S. condemned the military offensive, saying the Syrian regime is conducting it with help from Russia and Iran. The statement said after delaying passage of a U.N. Security Council (UNSC) resolution last week, Russia "has gone on to ignore its terms and to kill innocent civilians under the false auspices of counterterrorism operations."

The resolution demanded a 30-day cease-fire. The U.S. statement also said that between Feb. 24 and Feb. 28, "Russian military aircraft used north-west Syria's Humaymim Airfield to conduct 20 bombing missions per day in Damascus and Eastern Ghouta." Medical infrastructure and civilians were targeted in the bombings, the statement added. Similarly, French President Emmanuel Macron and U.N. Secretary-General Antonio Guterres also demanded the implementation of the cease-fire. "The two stressed in a phone call Saturday night the importance of the ceasefire to providing humanitarian aid for the population in Eastern Ghouta, the sources said. In another call, Macron urged one of al-Assad's backers, Iranian President Hassan Rouhani, to use his influence to rein in Syrian attacks on populations in besieged areas," dpa reported.

The Britain-based Syrian Observatory for Human Rights on Sunday said that the regime seized roughly one-quarter of the territory in recent days. There were reports claiming that opposition fighters were retreating. A spokesman for Jaish al-Islam was quoted by Al-Jazeera saying that "opposition fighters were forced to retreat and regroup in Eastern Ghouta because of the Syrian government's 'scorched earth' policy involving heavy artillery fire, air strikes, and helicopter attacks."

Although the opposition sources claim that the death toll has already surpassed 1,000, the Syrian Observatory said 709 civilians were killed, 166 of which were children. The number of people under the rubble is unknown. Residents in Eastern Ghouta, which has been under siege for almost four years, have been deprived of all aid, as neither medical equipment nor food is allowed inside. Although some international organizations attempt to deliver aid from time to time, the regime either blocks them or compels them to hand over the materials for their own use. Civil defense units are also not allowed in. As a result, since the rubble of destroyed buildings cannot be removed, corpses under the rubble cannot be taken out.