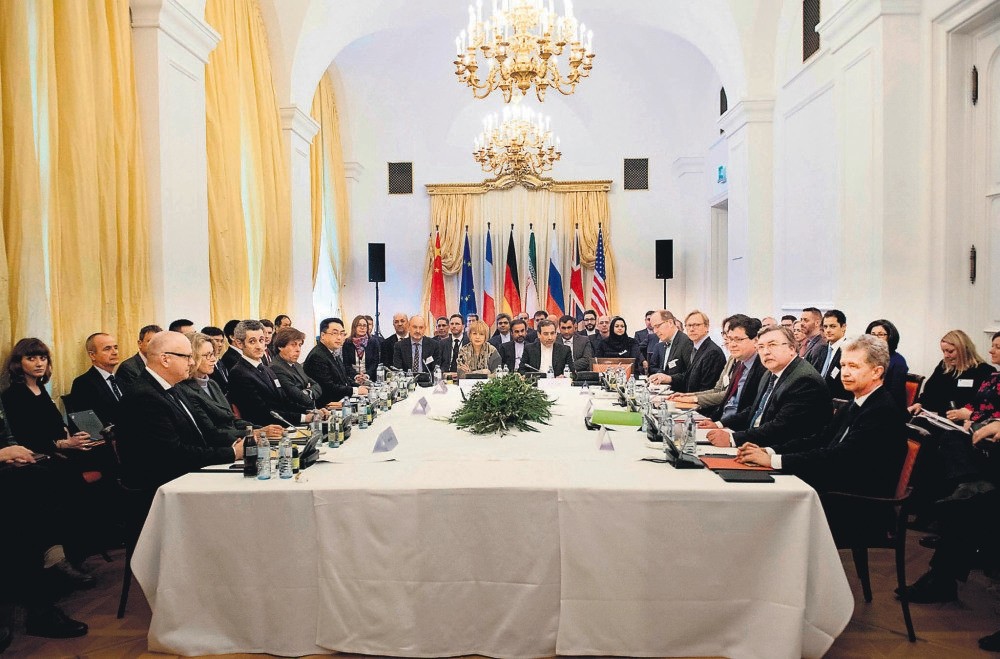 Talks on the Iran nuclear deal got underway in Vienna as time runs out to meet U.S. President Trump's ultimatum to fix the accord by mid-May

Senior diplomats from Iran and six major powers gathered in Vienna on Friday to discuss the status of their 2015 nuclear deal in a meeting overshadowed by U.S. threats to leave the pact.

"The constant ultimatums by U.S. President Donald Trump have created an atmosphere of doubt that ultimately blocks the successful implementation of the nuclear agreement," Iranian Deputy Foreign Minister Abbas Araqchi said ahead of the talks, as reported by dpa news agency. "For us, this is a clear violation of the nuclear deal," Araqchi told reporters on Thursday.

President Trump has vowed to walk away from the 2015 agreement in mid-May unless European countries join the U.S. in addressing what the president says are its fatal flaws. These include no penalties for Iran's missile work and support for militant groups in Lebanon, Syria, Yemen and elsewhere. This week's firing of U.S. Secretary of State Rex Tillerson and the choice of Iran hard-liner Mike Pompeo to replace him have fueled speculation Washington will pull out. State Department policy planning chief Brian Hook is leading the U.S. delegation in the meeting of the so-called Joint Comprehensive Plan of Action Joint Commission, or JCPOA.

The 2015 agreement between Iran and the United States, Britain, France, Germany, Russia and China obliged Tehran to scale down its nuclear program to prevent the development of nuclear weapons. Western sanctions were lifted in return. The deal, which was negotiated during the Obama administration, limits Iran's enrichment and stockpiling of material that could be applied to a nuclear weapons program. In exchange, Tehran was granted widespread relief from international trade, oil and banking sanctions.

In January, Trump warned that the U.S. would withdraw from the 2015 pact unless Iran accepts additional nuclear restrictions. Trump's next deadline to extend some of those concessions is May 12, and he has vowed not to do so again unless the Europeans meet his demands.

European Union foreign ministers, who will meet to discuss the issue Monday in Brussels, are expected to affirm that they believe the deal with Iran is good and work to discourage Trump from pulling out of the deal in May. At the same time, they are expected to start putting greater stress on Iran's missile development and its destabilizing role in the region.U.S.-Iran relations have become more hostile than ever as the White House takes an aggressive posture toward Tehran over test-firing a ballistic missile that could raise tensions in the already chaotic region.The Trump administration has vowed to confront Iran much more aggressively in the region where it shares the Saudi view that Tehran is fomenting instability via a number of proxies in Lebanon, Syria and Yemen among other countries. Tehran denies the allegations. Referring to Iran as "the number one terrorist state," Trump said the Middle Eastern country supplies money and weapons to terrorist groups. The Trump administration hit the ground running, re-imposing sanctions against Iran in its first weeks in office and also instating restrictions against those who are complicit with Tehran.