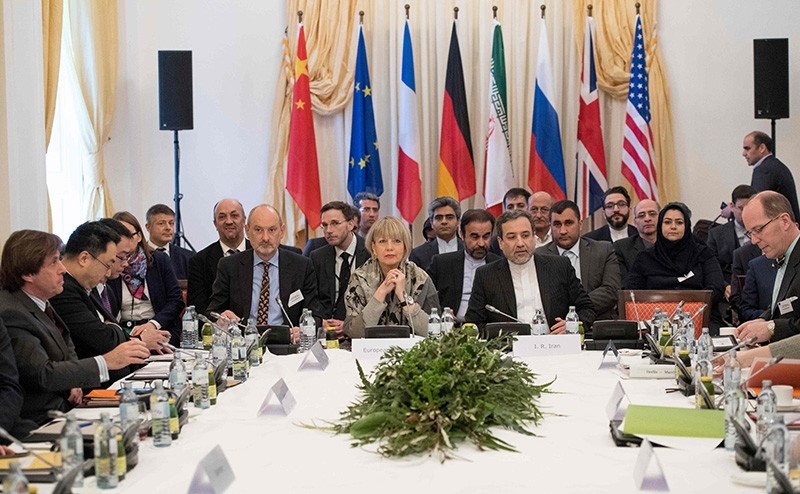 Abbas Araghchi, political deputy at the Ministry of Foreign Affairs of Iran, and the Secretary General of the EU External Action Service Helga Schmid along with delegates attend E3/EU+3, Iran talks in Vienna on March 16, 2018. (AFP Photo)
by French Press Agency - AFP Mar 17, 2018 12:00 am

Iran will not accept any changes to the nuclear deal, a senior official insisted Saturday, after the United States said it was seeking a "supplemental" accord with European powers.

"We will not accept any changes, any interpretation or new measure aimed at limiting" the 2015 deal between Iran and major powers, said Ali Shamkhani in remarks carried by ISNA news agency.

Shamkhani, secretary of the Supreme National Security Council, also warned European countries "against the temptation of playing at the same game as the Americans."

"The ballistic program of the Islamic Republic of Iran, which has a defensive nature, will steadfastly continue," said Shamkhani, who is a close ally of supreme leader Ali Khamenei.

This would cover Iran's ballistic missile program, its regional activities, the expiration of parts of the nuclear deal in the mid-2020s and tighter U.N. inspections, Hook said.

"We are taking things one week at a time, we are having very good discussions in London, Paris and Berlin," Hook, recently ousted Secretary of State Rex Tillerson's chief of strategy, said.

"There is a lot we agree on and where we disagree we are working to bridge our differences," he said in Vienna.

The 2015 accord between Iran and the United States, Russia, China, France, Britain and Germany curtailed Iran's nuclear activities in exchange for sanctions relief.

Iran, which according to the U.N. atomic watchdog has been abiding by the deal since it came into force in January 2016, has repeatedly ruled out any changes to the agreement.

Trump said in January that the nuclear deal must be "fixed" by May 12 or the United States will walk away.

The European parties to the agreement are desperate to save it and have been scrambling to find ways to persuade Trump not to rip it up.

Shamkhani made the remarks as he met Saturday in Tehran with Yusuf bin Alawi, the minister responsible for foreign affairs in Oman, a key Gulf ally of the U.S. with close ties to Iran.