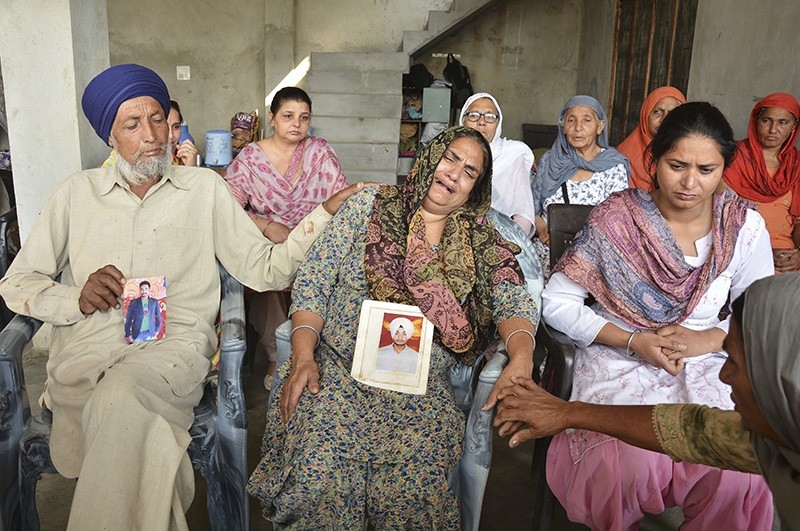 An Indian couple mourns holding portraits of their son, one of the 38 Indian workers whose bodies were found buried northwest of Mosul, in Bhoewal village in the northern Indian state of Punjab, March 20, 2018. (AP Photo)
by Daily Sabah with AP Mar 20, 2018 12:00 am

Iraqi authorities have discovered a mass grave with the bodies of 38 Indian construction workers abducted when Daesh militants overran the northern city of Mosul in 2014, officials said Tuesday.

The bodies were found buried near the village of Badush, northwest of Mosul, in an area that Iraqi forces recaptured last July.

The people killed were "citizens of the friendly Indian state. Their dignity was supposed to be protected, but the forces of evil wanted to defame the principles of Islam," said Najiha, the head of Iraq's Martyrs Establishment, a government body dealing with people killed in the fight against the Daesh terror group.

The abducted workers, most from northern India, had been employed by a construction company operating near Mosul when militants captured wide swaths of northern Iraq in the summer of 2014.

Relatives said they received panicked phone calls from some of the workers five days after Mosul was captured, asking for help.

Around 10,000 Indians worked and lived in Iraq at that time.

Dozens of mass graves have been discovered in territory once held by the Daesh terror group, though Iraq's government has only been able to examine a handful of them. Iraqi officials say they lack the resources and trained personnel to properly exhume so many sites.

At the height of their power, Daesh controlled nearly a third of the country.

After Iraq recaptured the area around Mosul, search operations led to a mound of dirt near Badush, where local residents said bodies had been buried by Daesh, Indian foreign minister Sushma Swaraj said in Parliament.

Iraqi authorities used radar to verify that the mound was a mass grave, she said, and then exhumed the bodies. Indian authorities then sent DNA samples from relatives of the missing workers.

Forty Indians were captured by the militants, though one man managed to escape. Iraqi authorities said the mass grave held 39 bodies, but only 38 have been positively identified through DNA analysis. Analysis on the last body has not yet been completed, Swaraj said.

"It is indeed a moment of deep grief and sadness for us," India's ambassador to Iraq, Pradeep Singh Rajpurohit, told reporters in Baghdad. "India strongly condemns terrorism in all forms and manifestations and stands in solidarity with the government and the people of Iraq in their fight against terrorism."

He said the bodies will be sent back to India "in a couple of weeks or so."

Harjit Masih, the only Indian survivor, has long said that the rest of the group had been killed. He said they had all been held for a number of days, then taken outside and ordered to kneel. Then the militants opened fire.

"They were killed in front of my eyes," he told reporters Tuesday in his north Indian home village. He was shot in the thigh but managed to escape.

Iraq, which is in the midst of an economic crisis, is also struggling to remove rebuild after more than three years of grueling war against the militants. The fight against Daesh has cost Iraq more than $1 billion in destroyed infrastructure, officials say.

In February, Turkey pledged $5 billion in loans and investment to its southern neighbor, making the country one of the top contributors to reconstruction efforts.