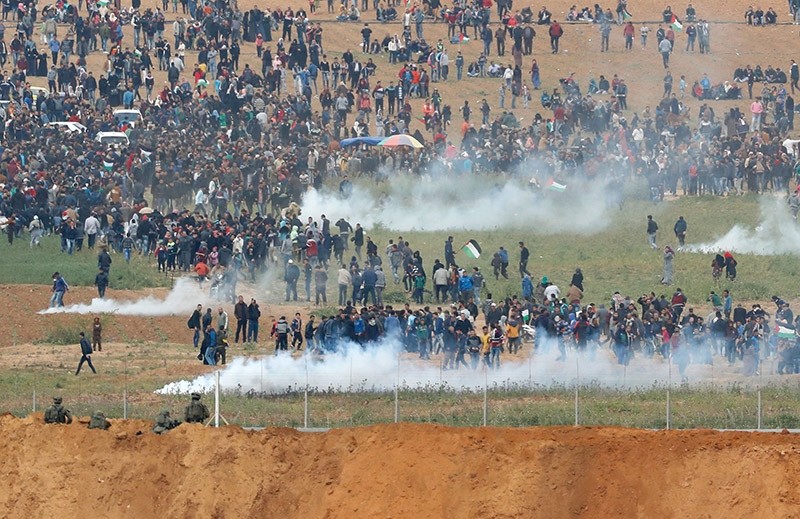 A picture taken on March 30, 2018 from the southern Israeli kibbutz of Nahal Oz across the border from the Gaza strip shows tear gas grenades falling during a Palestinian tent city protest commemorating Land Day. (AFP Photo)
by Compiled from Wire Services
Mar 30, 2018 12:00 am

Thousands of Palestinians marched near the Gaza-Israel border on Friday in a major protest leading to clashes with Israeli forces, in which at least 15 Palestinians were killed and more than 1400 hurt in clashes, the Palestinian health ministry said.

The ministry said those injured on Friday included protesters hit by live bullets and rubber-coated steel pellets, while others were overcome by tear gas. It did not provide a breakdown.

According to the ministry's statement, 15 protesters were killed by Israeli gunfire and a total of 1416 people were injured.

The Israeli military said that its troops had used "riot dispersal means and firing towards main instigators" and that some of the demonstrators were "rolling burning tires and hurling stones" at the border fence and at soldiers.

At least 10,000 Gazans gathered in different spots along the border, AFP journalists said, with smaller numbers entering within a few hundreds meters (yards) of the heavily fortified fence.

Israeli tanks and snipers were positioned on the other side of the border, using tear gas and live fire to force back the protesters.

Israel's military said in a statement that "thousands of Palestinians are rioting in six locations throughout the Gaza Strip, rolling burning tyres and hurling stones at the security fence and at (Israeli) troops, who are responding with riot dispersal means and firing towards main instigators."

Meanwhile, the Turkish foreign ministry strongly condemned Israel's disproportionate use of force in Gaza, saying that Turkey is greatly concerned by the deaths and injuries resulted due to the intervention of Israeli security forces.

"Israel must urgently end the use of that would increase tensions in the region," the statement said, calling on the international community to fulfill its responsibility to make Israel give up on its aggressive attitude.

Earlier Friday, before the main protests began, a Palestinian farmer was killed by Israeli tank fire near the border.

The march kicks off up to six weeks of protests dubbed "The Great March of Return," in the runup to the inauguration of the new U.S. embassy in Jerusalem around May 14.

Among those taking part on Friday was Ismail Haniya, the leader of the Hamas movement that controls Gaza.

"There is no alternative to Palestine and no solution except to return," he said in a statement, referring to Palestinian refugees seeking to go back to land they fled or were expelled from in 1948 that is now inside Israel.

Israel has accused Hamas of seeking to stir up protests to encourage violence.