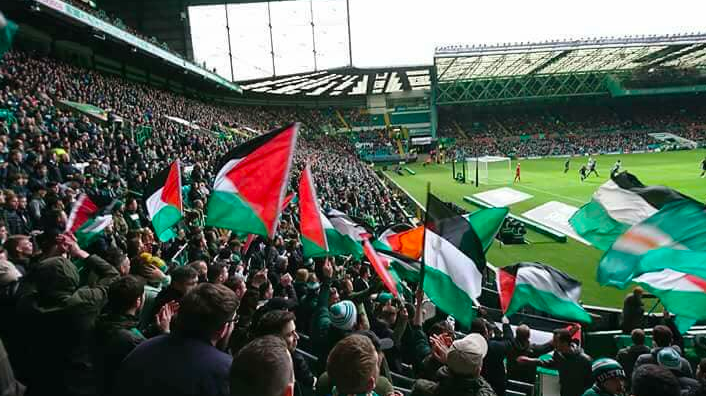 Scottish Celtic club displayed Palestinian flags on Saturday's match with Ross County FC in solidarity with 16 Palestinians who were killed by Israeli forces on Friday.

The Celtic fans raised 16 Palestinian flags to symbolize each Gaza protesters who were shot dead by the Israeli soldiers while participating in the peaceful Land Day demonstrations near the Gaza-Israel border.

The Scottish champions, known for their support to the Palestinian cause, were previously fined by the UEFA for their fans displaying dozens of Palestinian flags at a game against Israeli team Hapoel Beer Sheva in the Champions League playoff round.

At least 15 Gazans were martyred and hundreds injured when Israeli forces opened fire on protesters marking Land Day, an annual Palestinian commemoration of the deaths of six Arab Israeli citizens killed by Israeli forces in 1976, during demonstrations against government land confiscations in northern Israel.

The rallies were the start of a six-week protest that culminates May 15 -- the day Palestinians call Nakba, or Catastrophe when Israel was founded.

Demonstrators are demanding Palestinian refugees be allowed the right of return to towns and villages which their families fled, or were driven out of when the state of Israel was created in 1948.