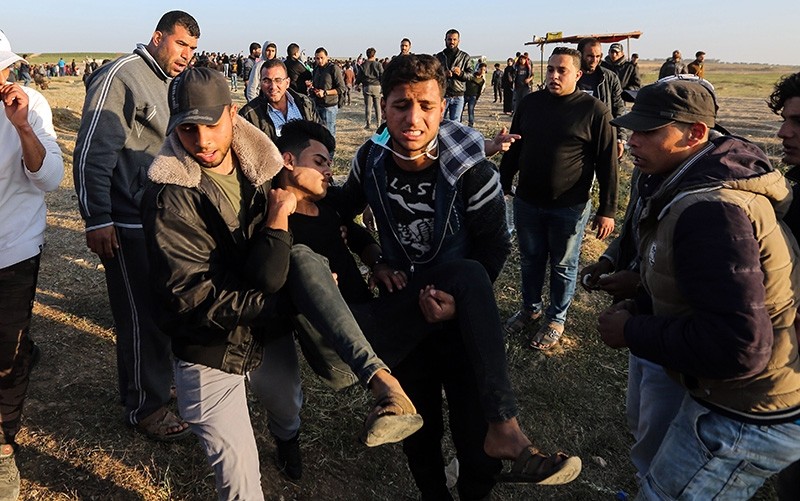 An injured Palestinian man is carried by protesters as they run for cover during a protest along the border with Israel, east of Gaza City in the Gaza strip (AFP Photo)
by Compiled from Wire Services Apr 01, 2018 12:00 am

Israel's defense minister rejected on Sunday calls for an inquiry into the killing of 16 Palestinians by the military during a Palestinian demonstration at the Gaza-Israel border.

"The procession of hypocrites calling for a committee of inquiry must understand that there will be no such thing," Lieberman said in statements.

U.N. Secretary-General Antonio Guterres has called for an independent investigation into Friday's bloodshed.

"Israeli soldiers did what was necessary. I think all our soldiers deserve a medal," the defense minister, Avigdor Lieberman, told Army Radio. "As for a commission of inquiry - there won't be one."

"The use of live ammunition should, in particular, be part of an independent and transparent investigation," Mogherini said in a statement on Saturday. "While Israel has the right to protect its borders, the use of force must be proportionate at all times."

At least 16 Gazans were killed and hundreds of others were injured when Israeli forces opened fire on rallies marking the "Land Day," an annual Palestinian commemoration of the deaths of six Arab Israeli citizens killed by Israeli forces in 1976, during demonstrations against government land confiscations in northern Israel.

Lieberman criticized the new head of the left-wing Meretz Party, Tamar Zandberg, for joining calls for launching a probe into the deaths near Gaza border, saying her party represented Palestinian, rather than Israeli interests.

Friday's rallies were the beginning of a six-week protest that culminates May 15 -- the day Palestinians call Nakba, or Catastrophe, when Israel was founded.

Demonstrators are demanding Palestinian refugees be allowed the right of return to towns and villages their families fled or were driven out of, when Israel was created in 1948.

The protest is scheduled to culminate on May 15, when Palestinians mark the "Nakba" or "Catastrophe" when hundreds of thousands fled or were driven out of their homes in 1948, when the state of Israel was created.

Israel has long ruled out any right of return, fearing it would lose its Jewish majority.

On Saturday, Israeli troops using live ammunition and rubber bullets shot and wounded about 70 Palestinians among demonstrators at the border, Palestinian officials said. Witnesses said stones were thrown at the soldiers.