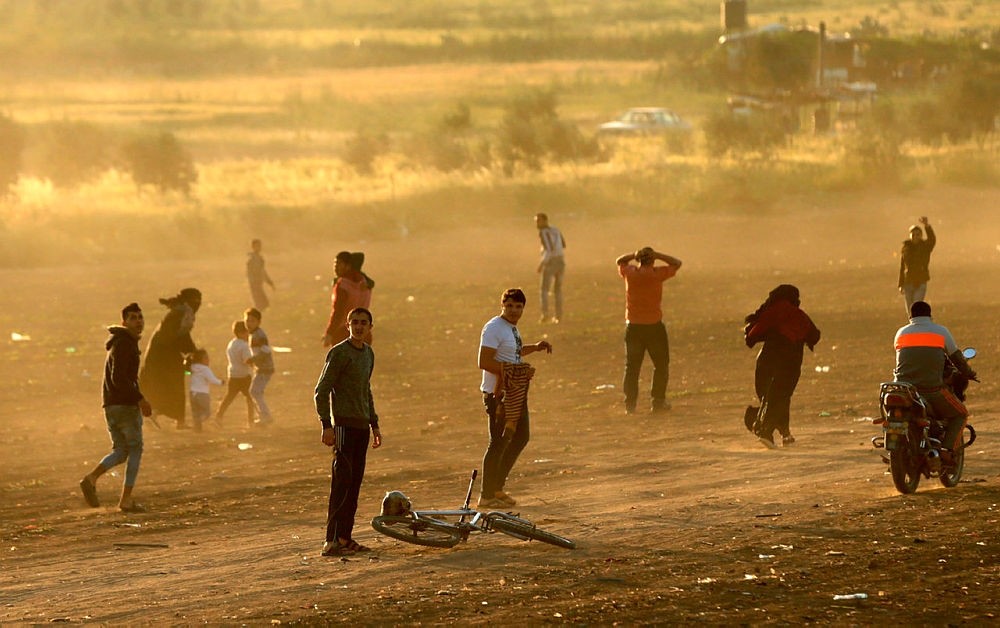 Palestinian protesters run for cover from tear gas fired by Israeli security forces during a protest along the border with Israel, east of Gaza City in the Gaza strip on March 31, 2018. (AFP Photo)
by Daily Sabah with AP Apr 01, 2018 12:00 am

The United States on Saturday blocked a draft U.N. Security Council statement calling for an investigation into Israel's killing of 16 Palestinian protesters on the Gaza-Israel border.

Israeli forces killed 16 Gazans and injured more than 1,400 Gazans in peaceful protests near the border on Friday, with using tear gas and live fire.

The videos from the protest showed Israeli snipers targeting unarmed and fleeing Palestinians who were within a few hundred yards (meters) of the heavily fortified border fence.

Among the 1,416 wounded, 758 of them were injured by live fire, with the remainder hurt by rubber bullets and tear gas inhalation, according to the Gazan health ministry.

Kuwait, which represents Arab countries on the council, presented the proposed statement, which called for an "independent and transparent investigation" of the violence.

The draft council statement also expressed "grave concern at the situation at the border."

And it reaffirmed "the right to peaceful protest" and expressed the council's "sorrow at the loss of innocent Palestinian lives."

The draft statement was circulated to the council on Friday, but on Saturday the United States raised objections and said it did not support its adoption, a Security Council diplomat told AFP.

The U.S. mission to the United Nations did not immediately respond to a request from AFP for comment.

Council members "called upon all sides to exercise restraint and prevent a further escalation," the draft said.

The proposed statement stressed the need to promote peace between Israel and the Palestinians based on a two-state solution.